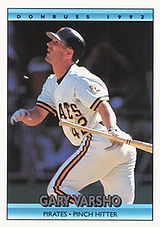 Outfielder Gary Varsho was selected by the Chicago Cubs in the fifth round of the 1982 amateur draft. He spent eight seasons in the majors, seeing most of his time as a pinch hitter.

While with the Pittsburgh Pirates, Varsho made an amazingly bad fielding play in the outfield. First he lost a fly ball so badly that he just stood there with his arms outstretched in desperation while shaking his head in bewilderment. The ball landed about 15 feet behind him. He turned around to go after it, but before he could take a single step, he fell over and landed flat on his face. He got up, went to the ball, and tried to throw it into the infield. Unfortunately, his play from hell wasn't over yet, as the ball slid out the side of his hand and landed next to him, like he was a long-lost member of the "Bad News Bears."

After his playing career ended, Varsho was manager of the Wisconsin Timber Rattlers in 1997 and 1998 and skipper of the Reading Phillies from 1999 to 2001. He was promoted to become the Philadelphia Phillies bench coach for the 2002 season. He also served as interim manager for the club for the last two games of the 2004 season after Larry Bowa was fired. Varsho was let go by the Phillies following the 2006 season. Despite his notable play with the Pirates, the Cleveland Indians hired him as their minor league outfield/baserunning coordinator in 2007. He then became the Pirates bench coach from 2008 to 2010. Varsho then became a scout for the Los Angeles Angels in 2012 and the Pirates starting in December 2016.

His brother Dale Varsho has been a college coach. His son, Daulton Varsho, reached the majors in 2020; he is named after former teammate Darren Daulton and is a catcher like his namesake.