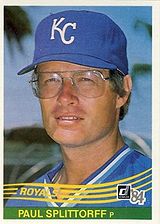 Paul Splittorff was associated with the Kansas City Royals for more than forty years. A pitcher known for his high leg kick, he won 166 games over a 15-season big league career, spent entirely with Kansas City, and is the team's all-time leader in pitcher wins. Following his playing days, he was a Royals broadcaster for more than two decades.

Splittorff attended Morningside College, where he played both baseball and basketball. While at Morningside, he was a member of Team USA in the 1967 Pan American Games when they won gold; it was the first time the U.S. beat Cuba in the Gold Medal game of an international tournament. It also marked the only Pan Am Games Gold for the U.S. baseball team through 2010. After graduation, he was drafted by the Royals in the 25th round of the 1968 amateur draft, a year before the expansion club played its first season.

Splittorff made his pro debut in 1968 with the Corning Royals, going 8-5 with a 3.45 ERA in 16 outings. He spent most of the next two summers with the Omaha Royals before being called up by Kansas City in September 1970. At the time of his call-up, Splittorf became the first Royals player to have originally been signed as a Royal to make the major league roster. He became the second Royals player to have been originally signed as a Royal to make an appearance as Jim York beat him to the mound. He made his big league debut September 23rd, starting a game against the Chicago White Sox and earning a loss after giving up three earned runs over seven innings of work. After beginning the next season back with Omaha, he was in the majors to stay by June of 1971. In his first full big league campaign, he went 8-9 with a 2.68 ERA and finished fifth in 1971 American League Rookie of the Year voting.

In 1973, Splittorff became the first Royals pitcher to win 20 games, and over the next decade, he was a mainstay in the team's rotation. On August 3rd, 1975, he hurled a one-hitter against the Oakland Athletics. He won a game in the American League Championship Series in both 1976 and 1977, but Kansas City fell to the New York Yankees both years. In 1978, he won 19 games and placed seventh in A.L. Cy Young Award voting - the only year he received votes - but his club once again lost the ALCS to the Yankees.

Kansas City finally reached the World Series in 1980, and Splittorff made one relief appearance in the Fall Classic, with his team losing to the Philadelphia Phillies in six games. As a 36 year-old in 1983, he posted a team-best 13 wins, but the following year, he lost his spot in a rotation that included young Bret Saberhagen, Mark Gubicza, and Danny Jackson. Splittorff made his final big league appearance on June 26th versus Oakland, and retired shortly thereafter.

Following his playing days, Splittorff became a television broadcaster for the Royals in 1988, a position he held until his passing. He also served as a college basketball broadcaster as well. Away from the diamond, he appeared with four of his teammates on Family Feud for one week following the 1980 World Series. He, John Wathan, Willie Wilson, Dan Quisenberry, and Dennis Leonard played against five members of the Phillies: Del Unser, Larry Bowa, Mike Schmidt, Dick Ruthven, and Garry Maddox.

On May 16, 2011, it was reported that Splittorff had been hospitalized for throat cancer and melanoma; his condition was described as terminal. He subsequently returned to his home and died on May 25th, at age 64. In his honor, the Royals wore a black patch inscribed with "Splitt" on the right sleeve of their uniforms for the remainder of that season.