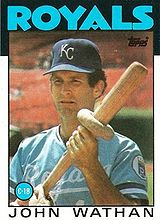 Primarily a catcher, John Wathan played a decade in the majors, entirely with the Kansas City Royals, and was later a coach, manager, and TV broadcaster.

He won Silver with Team USA in the 1970 Amateur World Series. After playing baseball and basketball at the University of San Diego, Wathan was drafted by the Royals in the January 1971 amateur draft and made his pro debut that year. He hit .303 with the Omaha Royals in 1975 and made the American Association All-Star team. He reached the majors in 1976 and hit .305 in 453 at-bats for the Royals in 1980 as the team reached the World Series that year. He also developed some fame as one of the few catchers of the time who could steal bases, recording a high of 36 in 1982 while only being caught 9 times. He also appeared in the 1985 World Series (which the Royals won), closing out his major league playing career.

Following his playing days, Wathan was a Royals coach in 1986 and managed in Omaha for most of 1987 before replacing Billy Gardner as the Kansas City skipper late in August. After leading the club to a second place finish in the AL West in 1989, the team slipped to sixth place the next year, and he was fired early in the 1991 campaign. He was a member of the California Angels coaching staff in 1992 and 1993 and was interim manager for 89 games in 1992 while Buck Rodgers recovered from injuries suffered in a team bus crash. He was then a Boston Red Sox coach in 1994.

In 1996 and 1997, Wathan was a Royals television broadcaster. He worked as a roving baserunning and bunting instructor for KC from 2006 to 2007 and served as a special assistant to the director of player development in 2008.

He is the father of Dusty Wathan and Derek Wathan.