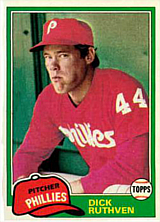 Dick Ruthven was a pitcher who had a 14-year career in the major leagues with three National League teams. His best year was in 1980, when he won 17 games for the Philadelphia Phillies, who went on to win the 1980 World Series. He was also part of the Chicago Cubs team that won the division in 1984, although he was on the downside of his career by then.

Ruthven was an All-American with California State University, Fresno, and came to the majors in 1973 straight out of school without stopping in the minors after being picked in the secondary phase of the January 1973 amateur draft. He had earlier been the 8th overall pick of the 1972 amateur draft, by the Minnesota Twins, but had not signed with them.

On the Phillies in 1973, he was the same age, 22, as Greg Luzinski and one year younger than Mike Schmidt. Pitchers on the team included Steve Carlton and Ken Brett. In December, 1975, he was traded to the Chicago White Sox, who turned around and traded him two days later to the Atlanta Braves. He was in the Braves' rotation in 1976 with Phil Niekro and Andy Messersmith.

He came back to the Phillies in a trade in June 1978 and went 13-5 the rest of the way, as the team won a division title. Carlton, Schmidt and Luzinski were still with the team, and Jim Kaat had joined the pitching staff. Pete Rose joined the team the following season, in 1979. Dick joined the Chicago Cubs partway through the 1983 season, pitching on a staff that included the 40-year-old Fergie Jenkins, a young Lee Smith and Rick Reuschel, and the following year Rick Sutcliffe and Dennis Eckersley.

Ruthven's twin sister married Tom Hutton. His son, Sean Ruthven, appeared in the 2003 College World Series as a pitcher with the University of Georgia. Sean was drafted by the Colorado Rockies in the 2005 amateur draft, but he never made the majors.