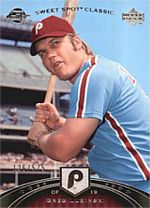 Greg Luzinski was one of the great sluggers of the 1970s and 1980s, clubbing 307 home runs during his career and appearing in the All-Star Game four times.

A native Chicagoan, Luzinski attended Notre Dame High School for Boys before being selected by the Philadelphia Phillies in the first round of the 1968 Amateur Draft. Originally a first baseman, he signed with the Phillies as a 17-year-old and made his pro debut that summer with the Huron Phillies, hitting 13 home runs in 57 games. After hitting 31 homers for the Raleigh-Durham Phillies in 1969 and 33 for the Reading Phillies in 1970, he made his big league premiere as a September call-up in 1970. He hit 36 home runs for the Eugene Emeralds the next year, 1971, before returning to the majors for good late in the season.

Moved to left field in 1972, Luzinski was an Opening Day starter. He hit .281 with 18 home runs, 33 doubles, and 68 RBI in his first full big league campaign despite being a defensive liability, committing 11 errors (though he improved somewhat thereafter, his range was always well below the league average). He improved to .285 with 29 homers and 97 RBI the next summer before being slowed by injuries in 1974. Nonetheless, he bounced back in 1975, hitting .300 with 34 home runs and a National League-leading 120 RBI, while finishing second in Most Valuable Player voting and making the All-Star team for the first of four straight years.

Luzinski's production dropped to 21 home runs in 1976, including one off Dan Warthen of the Montreal Expos on September 26th (the last homer hit at Jarry Park). The Phillies won the NL East title that summer, and he hit .273 with a home run, 2 doubles, and 3 RBI in the NLCS as Philadelphia fell to the Cincinnati Reds. He put together his best big league season the next summer, 1977, hitting .309 with 39 homers, 99 runs scored, and 130 RBI, polling second once more in the MVP voting. The Phillies won the division again that year and in 1978, falling to the Los Angeles Dodgers in the NLCS each year.

Luzinski put up the worst numbers of his Phillies career in 1980, hitting just .228 with 19 home runs. However, the club won a division title, and he hit .294 in the NLCS against the Houston Astros. His home run off Ken Forsch in Game 1 was the only home run of the series. He struggled in the World Series, going hitless in 9 at-bats, but the Phillies captured the Series in six games over the Kansas City Royals.

Prior to the 1981 season, Luzinski returned to his hometown when his contract was sold to the Chicago White Sox. As the team's designated hitter, he hit 21 home runs in his first year with the club, one less than the American League-leading total of 22, shared by four players. The following summer, 1982, he hit .292 with 18 home runs and 102 RBI. He was a team leader on the division-winning White Sox in 1983, clubbing 32 homers, 3 of which cleared the Comiskey Park roof. On June 8th and June 9th, 1984, Luzinski hit grand slams in back-to-back games. From July 28th to August 7th, he drove in one or more runs in 10 straight games. He ended the year with a .238 average and just 13 home runs, and retired after the season.

After his playing days, Luzinski was an Oakland Athletics coach in 1993 and a member of the Kansas City Royals staff from 1995 to 1997. He also spent time as a high school coach between 1985 and 1992. He currently has a barbecue stand, Bull's Barbecue, at Citizens Bank Park in Philadelphia. In 1998, Luzinski was honored with induction into the Philadelphia Baseball Wall of Fame.

Luzinski is the brother of minor league outfielder Richard Luzinski and father of Ryan Luzinski. His first baseball card appearance was in the 1971 Topps set.