Inducted into Hall of Fame in 1954 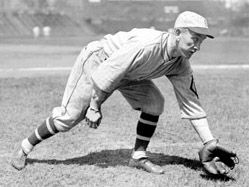 ". . . for a fellow to do all those crazy things and still keep his job, he had to be a damned good ball player. . . He was full of fun, but he could play ball." -- Joe McCarthy

Standing less than five and a half feet tall, slick-fielding infielder Rabbit Maranville was highly regarded for his defensive abilities during a twenty-three year big league career with five National League clubs. Despite being one of the worst hitters to get into the Hall of Fame, he was a fan favorite during his playing days, well known for his personality as well as his playing skills.

Maranville began his baseball career New Bedford Whalers of the New England League in 1911. After two years there, he joined the Boston Braves late in the 1912 campaign and was the club's regular shortstop the following summer, finishing third in Most Valuable Player voting in his first full big league season. In 1914, he hit just .246 but finished second in MVP balloting as his club went on a tremendous second-half tear, improving from last place in early July to capture the NL pennant. He hit .308 with 3 RBIs in the World Series, as the Braves upset the Philadelphia Athletics in four games.

After nine years with the Braves, Maranville was traded to the Pittsburgh Pirates prior to the 1921 season. The next summer, he had 672 official at-bats without hitting a single home run, an all-time record. His 747 plate appearances that year without a homer are also a record. However, despite being moved to second base for the first time in his career in 1922, he was still excellent in the field, pacing the circuit in fielding percentage, total chances, and double plays.

Following the 1924 season, Maranville was dealt to the Chicago Cubs. He only appeared in 75 games in one season there but spent part of the summer as the team's manager, going 23-30. He joined the Brooklyn Robins the next summer but was released in August. He then played for the Rochester Tribe of the International League for most of 1927 before the St. Louis Cardinals brought him back to the majors. He became the team's regular shortstop the next year, and hit .308 in the 1928 World Series, as the Cardinals fell to the New York Yankees.

Maranville returned to the Braves in 1929 and was a regular for them for the next five seasons, three as a shortstop and two as a second baseman. However, late in the 1933 campaign, he suffered a broken leg that sidelined him for more than a year. He returned to the team for one final stint in 1935 as a 43-year-old.

Following his big league days, Maranville spent several years as a minor league manager. While leading the Elmira Pioneers in 1936, he hit .323 in 123 games. In 1939, as the 47-year-old skipper of the Albany Senators, he batted a few more times. He died of a heart attack in 1954 at age 61 and was inducted into the Hall of Fame later that year.

"Today I consider Maranville the greatest player to come into the game since Ty Cobb cracked his way into the ranks of big leaguers." - George Stallings, manager of the 1914 "Miracle Braves"