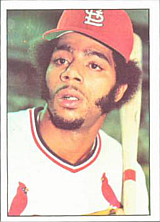 Outfielder Bake McBride was a high-average specialist, with a .299 lifetime average in the days before high batting averages became common. He hit over .300 seven times in his 11-year career.

After attending Westminster College, McBride was selected by the St. Louis Cardinals in the 37th round of the 1970 amateur draft. He reached the majors in 1973 and was the National League Rookie of the Year in 1974, when he hit .309 and stole 30 bases. An All-Star in 1976, when he hit a career-best .335, he hit over .300 in his first five big league seasons.

Midway through the 1977 season, McBride was dealt to the Philadelphia Phillies in a trade that netted the Cards Rick Bosetti, Dane Iorg and Tom Underwood. Bake hit .339 following the trade, to go along with a career-high 36 stolen bases. He was almost exclusively a center fielder with St. Louis, but when he moved to Philadelphia, the team already had the premier defender at the position in Garry Maddox, so Bake moved to right field. Despite a lower batting average in 1978, he led NL outfielders in fielding percentage that summer, and the next year, he was second in the NL with 12 triples. In 1980, he bounced back to hit .309 with 33 doubles and 10 triples and was tenth in MVP voting, as the Phillies reached the World Series. He smashed a three-run homer in Game 1 and scored the winning run in Game 2 that fall. Overall, he hit .304 in the Series, where he mostly hit cleanup despite having only 9 home runs during the regular season. The Phillies won their first ever World Championship, defeating the Kansas City Royals.

McBride struggled with injuries in 1981 and was traded to the Cleveland Indians for Sid Monge prior to the 1982 season. He continued to be plagued by injuries and ended his big league career following two years in Cleveland.

In 1989, McBride played for the St. Petersburg Pelicans and Orlando Juice of the Senior Professional Baseball Association. He batted .296 in 29 games between both clubs; 3 games with St. Petersburg and 26 games with Orlando.

Following his playing days, Bake worked as a minor league coach for the New York Mets and the Cardinals in the 1980s and 1990s.