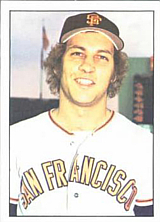 John "The Count" Montefusco pitched 13 seasons in the major leagues, more than half of that time with the San Francisco Giants.

Born in Long Branch, New Jersey, Montefusco signed as a free agent with the Giants in 1972; despite a great pitching record at a community college and experience in semi-pro ball, he attracted no draft interest. He pitched well in the minors, going 9-2 for the Decatur Commodores in 1973 and 15-12 with two teams in 1974. He earned a September call-up in the latter year, and in his debut against the Los Angeles Dodgers on September 3, 1974 he became one of only three players in big league history to homer in his first at-bat and win the game as a pitcher. Overall, he went 3-2 in seven games with San Francisco that year.

Montefusco's most successful years were his first two full seasons in the majors, when he finished ninth in the National League in victories each year. In 1975, he won 15 games, struck out 215 batters, led the league in strikeouts per nine innings, and posted a 2.88 ERA en route to being named NL Rookie of the year (beating future Hall of Famer Gary Carter for the honor). The next summer, in 1976, he won 16 games, led the NL with 6 shutouts, played in the All-Star Game, and threw a no-hitter against the Atlanta Braves on September 29th.

Montefusco struggled with arm injuries over the next four seasons before being traded to the Braves following the 1980 campaign. After playing for Atlanta in 1981 and the San Diego Padres in 1982, he had another good year in 1983, split between the Padres and the New York Yankees. After going 9-4 with 4 saves for San Diego, he was dealt to New York in late August and went 5-0 in 6 starts for the Yankees. He spent the next three years with the Yankees but only managed 5 wins in 18 appearances over that span.

The Count was arrested in October 1997 and charged with aggravated sexual assault, making terroristic threats, assault, burglary and criminal mischief after beating his ex-wife, Doris. He served more than two years behind bars before a November 1999 release. In February 2000, he was found guilty of criminal trespass and simple assault, receiving three years of probation. A lawsuit filed by Montefusco against ESPN was dismissed in 2001 after a judge ruled that being compared to O.J. Simpson does not constitute defamation.