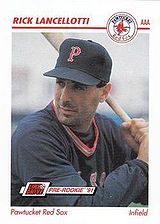 Rick Lancellotti was a slugger who won three home run crowns in the minors, one in Japan and one in the Senior Professional Baseball Association. A .252 hitter in the minors, he smacked 348 home runs in his professional career (not counting winter ball), but only two in the major leagues. He topped 100 RBI three times in the minor leagues. A combination of low OBPs and defensive question marks prevented him from getting many chances in The Show. Lancellotti played in the United States, Mexico, Colombia, Venezuela, Italy and Japan.

Lancellotti set the Glassboro State College record with 29 career homers (since broken). [1] He was an 11th-round draft pick of the Pittsburgh Pirates in 1977, one round before they took Wayne Tolleson. He hit .264/.372/.479 in his debut with the Charleston Patriots. In 1978, the youngster batted .241/.345/.392 for the Salem Pirates and was 5th in the Carolina League with 15 home runs. He led the league's outfielders with 15 errors but also was second to Lee Graham with 15 assists. [2]

In 1979, Rick emerged as a star power threat. He produced at a .287/.358/.585 clip for the Buffalo Bisons. He led the Eastern League in slugging (.014 ahead of Dave Schmidt), total bases (296, 7 more than Luis Salazar), RBI (107, tied with Joe Lefebvre) and home runs (41, 7 more than runner-up and teammate Tony Pena). He tied the EL home run record, held solely for 49 years by Ken Strong and still shares the mark with Strong through 2014 [3]. He scored 95 runs, second to Salazar, and his 13 sacrifice flies were second (one behind George Vukovich). His 16 errors were second among outfielders, two behind Kevin Bass, and he tied for 5th with 13 assists. He made the All-Star outfield alongside Lefebvre, Salazar and Vukovich. [4]

In 1982, Rick batted .272/.355/.470, mainly playing DH for Hawaii. He drove in 95, but in the high-scoring PCL of that era, he was 49 behind leader Ron Kittle and 43 behind Greg Brock; on the other hand, Hawaii was a low-offense environment compared to Kittle's Edmonton or Brock's Albuquerque. He was 6th in the 1982 PCL in RBI, between Candy Maldonado and Chris Nyman, and easily led his club.

A late-season call-up to San Diego, he saw the most playing tiome he would see in the majors that year, but that was only 39 AB. He hit sixth and played first base in his debut on August 27, 1982, going 0 for 4 and striking out in his first at-bat, facing Joaquin Andujar. His first hit was three-run double off Bob Forsch. Overall, he batted .179/.220/.231 in 17 games for the Padres. It would be four years until he returned to the major leagues. In the winter, he hit .277 and slugged .393 for the Cardenales de Lara, with only one homer but 10 doubles in 28 games. He was then 5 for 19 with a home run in the postseason. [6]

Lancellotti was acquired by the Montréal Expos in a cash deal before the 1983 season. He played 31 games for the Wichita Aeros before being released in late May. Less than two weeks later, he was signed by the Texas Rangers and played 33 games for the Oklahoma City 89ers. Overall, he had hit .206/.275/.367 in those two American Association stops. Released by Texas after about six weeks, he was signed again by San Diego.

Lancellotti signed back with San Francisco for 1986 and hit .275/.353/.545 in another try with Phoenix. He led the 1986 PCL with 31 home runs for his second home run title (passing Mickey Brantley in the final week to lead by one) and drove in 106, tied with Larry See for third behind Tim Pyznarski and Rob Nelson. He was 5th in slugging, between Dave Valle and Dave Hengel. He did not make the PCL All-Star team; Brantley, Glenn Braggs and Ty Gainey were picked in the outfield. [8] He returned to the majors briefly, going 4 for 18 with 7 strikeouts for the Giants and getting only one start. He did hit his two major league homers - a two-run shot off Jeff Dedmon on September 21st and a three-run blast against Ron Robinson two days later.

In the fall of 1986, Lancellotti was offered a shot to go to Japan with teammate Randy Johnson. After talking it over with Jim Lefebvre about Lefebvre's experience in Japan, Rick was leaning against not going. But when GM Al Rosen said he could not guarantee a spot for the veteran, Lancellotti finally opted to go for the sure money in Japan. [9]

Lancellotti described the differences in the baseball cultures in the two countries: in the US, he could walk down the street with his jersey and no one would recognize him, while in Japan, he could go out with a hat pulled down and old clothes and a crowd would surround him. He also reported being worn out by the aggressive practices employed at the time. [10]

His first NPB homer came off Tadashi Kashima. In June of 1987, Lancellotti homered in six straight games, a new record for the Hiroshima Carp (Takahiro Arai tied it 18 years later) and one shy of Sadaharu Oh's NPB record. [11] The next game, he drew five walks and only saw one strike. (Lancellotti recounts the events as taking place in August; japanbaseballdaily.com lists June). [12] On August 2nd, he tied the Hiroshima record with 8 RBI in a game. [13]

Rick batted .218/.323/.536 in his first year in Japan. He led the Central League with 39 home runs, becoming the first home run leader in NPB history to finish last in batting average. [14] He only had 9 doubles, one triple and 39 singles to go with the 39 homers. He led the CL with 114 strikeouts. He was 7th in slugging, between Toru Sugiura and Wally Yonamine. He also tied Randy Bass for 4th in walks (60).

Returning to Japan in 1988, he slipped with a .189/.275/.455 batting line; in 264 AB, he hit 19 homers and 21 singles. His 7 sacrifice flies led the CL that year despite only playing 79 games; he also still tied Doug DeCinces for 8th in home runs. Lancellotti claimed that manager Junro Anan was trying to lose late in the year after it was revealed he would not return. Lancellotti said that Anan would let the pitcher hit in the crucial instance one game instead of pinch-hitting for him. When Lancellotti revealed his theory to the Japanese media, Hiroshima said they would send him to ni-gun but he refused. They then said they would not pay him. They reached a deal whereby Lancellotti would be paid but would claim it was all a misunderstanding. He did not discuss the secret agreement with club officials until after his career in Japan ended. [15] Overall, his batting line with Hiroshima over two years was .207/.313/.504 with 58 home runs in 667 AB.

He played for the Sun City Rays of the Senior Professional Baseball Association in 1990. He played in 23 games and batted .264 and was tied for the league lead of 5 home runs as well as leading the league (even with Ron Roenicke and Butch Benton) with 23 RBI when the SPBA folded.

Back with Pawtucket in 1991, Lancellotti won his fifth home run crown - and his second while hitting under .220. He batted .209/.301/.452 and paced the 1991 International League (and all Red Sox farmhands) with 21 home runs. He led the IL by one over Chito Martinez, was 10th in RBI (64) and was 6th in slugging (between Benny Distefano and John Ramos). Among Red Sox farmhands, he had 3 more dingers then #2 Bob Zupcic. He did not make the IL All-Star team, which was unsurprising as he did not come close to the top 10 in OPS given his low average.

Rick was the subject of a major error with Pawtucket, though. Boston Globe columnist Bob Ryan claimed that Lancellotti had broken the minor league home run crown. People thought the 255 figure used as the minor league home run record in Bull Durham was the real record, belonging to somebody else. Ryan's error spread rapidly and Lancellotti appeared on CNN and the Today Show, in USA Today and Sports Illustrated, none of which bothered checking a record book. At the time, Hector Espino was the all-time home run leader with 484, well ahead of Lancellotti. Among US-based minor leagues, Buzz Arlett's 432 were also clearly ahead and Lancellotti was not within 100 of the top 10 all-time. Ryan's mistake is still cited, though, in online sources and probably elsewhere in 2015. [16]

Lancellotti's 16th and final season in professional baseball was in Serie A1 in Italy. He said "It was a nice way to go out. They only played twice a week, practiced for about an hour on three days, and gave us the other two days off." He also commented positively about the food. The fans at the time were not well-informed, according to Lancellotti, and would sometimes cheer for the wrong team. [17] He hit .315/.442/.535 with 36 runs, 37 RBI and 7 homers in 36 games for the Cariparma Angels. He tied Luigi Carrozza for 8th in the high-offense aluminum bat league in runs, tied Ed Vosberg (solely a pitcher in the US) for 5th in RBI and tied for 5th in walks (27). He did not make the top 10 in homers. He was just 2 for 15 in the semifinals, though. As he had in 1982 and 1990, Rick even pitched one game in a mop-up role, allowing one run in one inning. [18]

After retiring, Lancellotti decided to start a baseball school due to his love of teaching. He began the Buffalo School of Baseball in 1993. [19] In January of 1995, Rick was profiled along with two coaches at his school (Chris Rauth and Mike Twardoski) by The Sporting News in a piece on possible replacement players for the 1995 strike. He said that "[t]he union doesn't care about minor league guys... guys are trying to make a living down here. Why couldn't they cut 1 percent off the major league salaries and distribute it to minor leaguers?... How many swimming pools do you need?" [20] He wound up with the Florida Marlins in spring training. [21]

As of 2013, Lancellotti was still running the Buffalo School of Baseball.