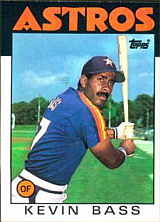 Outfielder Kevin Bass was selected by the Milwaukee Brewers in the second round of the 1977 amateur draft and first came up to the majors with Milwaukee at the start of the 1982 season. He served mainly as a defensive substitute in the outfield and went hitless in 18 games in a Brewer uniform. Sent back to the minors, he was included in a trade with the Houston Astros that September that brought veteran starting pitcher Don Sutton to Milwaukee for the Brewers' playoff push. Kevin collected his first major league hit with the Astros on September 8 but overall went 1 for 33 in 1982 for a dreadful .030 batting average.

Bass fared better with Houston in 1983 and hit his first home run on April 15. By 1985, he was a regular, and that season he hit 16 homers despite playing in the pitcher-friendly Astrodome. He had his finest season the next year, hitting .311 with 20 homers, stealing 22 bases, making the All-Star team, and putting together a 20-game hitting streak. His season ended on a low note as he struck out with two outs in the 16th inning of Game 6 of the NLCS, ending the series and the Astros' hopes as the New York Mets moved on to win the World Series. Bass hit 19 home runs in 1987, including three in extra innings, and set a career best with 85 RBI. The next year, he stole a personal-best 31 bases. In 1989, he tied a National League record by hitting a home run from both sides of the plate in one game for the third time in his career in an August 20 game against the Chicago Cubs. He collected 5 RBI in that game. After the season, Bass became a free agent and signed with the San Francisco Giants. He was slowed by injuries in the last several years of his career and never again matched his previous numbers.

Bass' brother, Richard Bass, was a minor league outfielder in 1976 and 1977, and his cousin is NFL star James Lofton. He had two sons play professionally; Garrett peaked in A ball with the Washington Nationals organization in 2008, while Justin peaked in High A in the Los Angeles Angels chain in 2011.