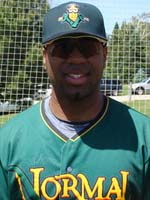 The son of Kevin Bass, brother of Justin Bass, and nephew of Richard Bass, Garrett Bass made his professional debut in 2007.

On February 1, 2010, he was signed by the Normal CornBelters of the Frontier League. He was in the starting lineup of the very first game played by the CornBelters against the Evansville Otters on May 21 but was released on June 9th.