The Normal Cornbelters began play in the Western Division of the independent Frontier League starting with the 2010 season. Their stadium is called The Corn Crib.

Following a controversial first online contest to name the team, a second was held. On May 18, 2009, team management selected the "CornBelters" from four possible choices. Their name and their logo reflect the importance of farming, and especially corn, to the local economy.

The CornBelters very first game was on the road on May 21, 2010 against the Evansville Otters at Bosse Field in Evansville, Indiana. The CornBelters won 7-0 behind the pitching of Tyler Lavigne and the hitting of third baseman Daniel Cox and first baseman Steve Alexander. They played their first home game at the Corn Crib on June 1st against the Windy City ThunderBolts, with the ThunderBolts winning 3-2. The first home victory for the CornBelters came on June 4th, when the they beat the Kalamazoo Kings 13-12 in 12 innings with a walk-off home run by Jeff Cowan.

After the 2018 season ended ownership announced that the CornBelters would leave the Frontier League to join the summer collegiate Prospect League. 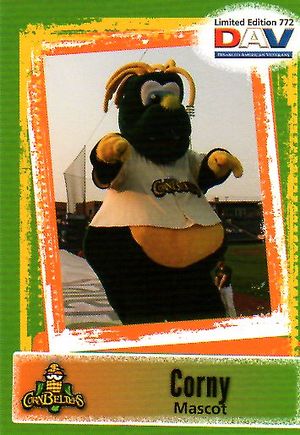 Corny, mascot of the Normal CornBelters

The team mascot is named Corny. He is a cornosaurus, and was born on August 7th of 2009 in Normal IL. 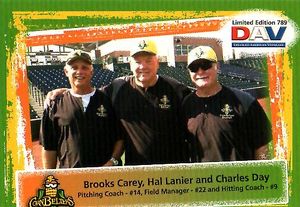 Hal Lanier was announced as the CornBelters' manager on October 7, 2009. After guiding the CornBetlers to a 90-102 record in their first two seasons, on September 13, 2011, it was reported the CornBelters did not offer Lanier a new contract.

On May 15, 2011, Charles "Boots" Day joined the staff as the CornBelters' new hitting coach.

On October 10, 2011, Normal signed Chad Parker as the field manager. Parker previously managed the River City Rascals in the Frontier League in 2008-2009, and the Joliet JackHammers in the Northern League during 2010. He was named Frontier League Manager of the Year in 2009 while managing the Rascals. In 2010, Parker was the Northern League Manager of the Year as skipper of the JackHammers.

The CornBelters announced Brian Lawrence as the pitching coach on February 29, 2012. Bringing a wealth of experience to the CornBelters, Lawrence retired as a player in June 2011. At the MLB level, he pitched with the San Diego Padres from 2001-2005, where in 2005 he had two post-season appearances on the Padres staff against the St. Louis Cardinals in the National League Division Series. In 2007, Brian was on the staff with the New York Mets in 2007. He pitched in various levels of the Padres minor league system from 1998-2001. In 2007, Lawrence pitched in the minors for the Mets and the Colorado Rockies; in 2008 for the Atlanta Braves AAA team and independent ball for the Camden Riversharks in the Atlantic League. Brian threw in independent leagues again in 2009 for Camden as well as the Orange County Flyers in the Golden Baseball League before moving to AAA for both the Padres again and then the Florida Marlins. In the 2010 season, he was on the staff for the Marlins' AAA team. He ended his playing career in 2011 with the Los Angeles Angels AAA team in Salt Lake City.

On September 3, 2012, one day after finishing the 2012 Frontier League season with the worst record, 29-67, the Normal CornBelters front office relieved Chad Parker of his duties. Near the bottom of the league in all team statistics, the CornBelters were in the cellar nearly all season long, and only went 1-13 in the last 14 games of the season. The team's poor performance was cited as the main reason for firing Parker.

CornBelters games are broadcast over the WJCB/CornBelters Radio Network (WJBC 1230 AM and 93.7 FM; WEZC 95.9 FM and wjbc.com where all games are streamed live).

A native of McNabb IL, Greg Halbleib is the radio voice par excellence of the Normal CornBelters. In his second season behind the mike on the WJBC CornBelters Radio Network, Greg was the public address voice at the Corn Crib during the 2010 inaugural season. He's been on the air at WJBC since 2002; he's also the radio play-by-play voice and media relations director of Bloomington Blaze hockey, and is the television play-by-play voice for Missouri Valley Conference volleyball. Starting his broadcasting career in 1979, Greg has won seven Silver Dome Awards from the Illinois Broadcasters Association for his play-by-play, and was inducted into the Illinois Basketball Coaches Association Hall of Fame in 2009.

Gary Griffith, a long-time minor league play-by-play announcer, was on the air during the 2010 inaugural season.

CornBelters All-Stars in the Frontier League[edit]