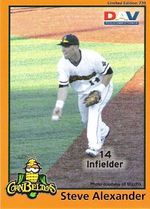 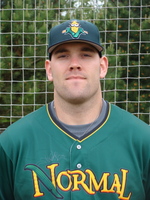 The Philadelphia Phillies took Steve Alexander in the 27th round of the 2005 amateur draft but he did not sign.

Alexander played for the Blythe Heat in the Arizona Winter League where hit batted .390 and 9 homers in 18 games.

The Normal CornBelters acquired Alexander on March 19, 2010 from the Lincoln Saltdogs of the American Association for a player to be named later.

Steve was a starter at first base for the CornBelters in their very first game on May 21, 2010 against the Evansville Otters at Bosse Field in Evansville, IN.

This biographical article is missing the person's: birth place
Retrieved from "https://www.baseball-reference.com/bpv/index.php?title=Steve_Alexander&oldid=1080189"
Categories: