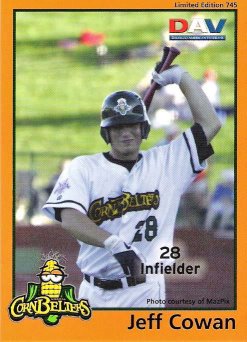 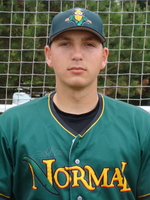 Jeff Cowan, a native of Ontario, Canada, was a member of Canada's National Junior Team in 2005. He was the starting shortstop of Ontario's Gold Medal Team at the Canada Summer Games in Regina, 2005.

Jeff attended High Point University of the Big South Conference from 2006-2009. He was named team captain in his sophomore year, and was team captain for three years. Cowan holds the all-time record at High Point with 268 career hits at High Point, 185 runs scored, ans 112 walks. Appearing in 220 career games, he reached base by hit by pitch 51 times in his career including 18 times in 2009 alone.

In 2008, Cowan played for the Wisconsin Woodchucks of the Northwoods League. He set a single season record for walks (51), runs scored (54), games played (64), and was second in the league with a .439 on base percentage. Jeff started at 3B at the Northwoods League All-Star Game in July, 2008.

On February 16, 2010, the Normal CornBelters signed Cowan to the team.

Jeff started at shortstop for the CornBelters on May 22 against the Evansville Otters at Bosse Field in Evansville, IN. Though he went 0-4 at the plate, he scored 2 runs.

Cowan's first-pitch walk-off home run in the bottom of the 12th inning against the Kalamazoo Kings gave the CornBelters their first home win on June 4 at the Corn Crib by a score of 13-12.

Cowan took over as starting shortstop for the CornBelters in June after an injury to Andre Alvarado forced him to the injured list.

Jeff got on base 25 times for the CornBelters during the 2010 season via the hit-by-pitch route, tops in the Frontier League.