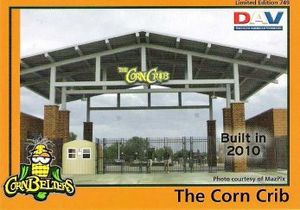 The Corn Crib, home of the Normal CornBelters

The Corn Crib, home to the Normal CornBelters of the Frontier League and the Heartland Hawks of the Mid-West Athletic Conference, opened in Normal, IL in 2010.

Construction began in March 2009, and enough was completed in time for the CornBelters' home opener on June 1, 2010.

In a naming rights partnership with the Illinois Corn Marketing Board, the CornBelters' dubbed the stadium as The Corn Crib.

CornBelters' president Steve Malliet said, "This ballpark is going to be special. It will let people know in a fun and exciting atmosphere all about corn. We feel the name and logo of the stadium will give the community, region and state a renewed understanding of how agriculture plays a quiet but essential role in their daily lives."

Sprinturf covers the entire playing field and foul ball areas including the bull pens. There is no dirt anywhere. Players are mostly positive about the artificial surface.

A major feature in the left field area is an area for children featuring face-painting and inflatables.