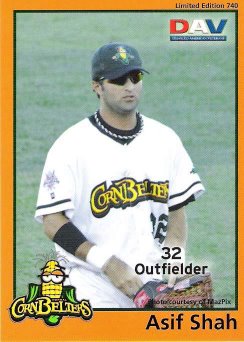 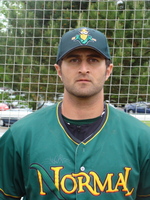 After moving on to the Southeast Missouri State University Redhawks in 2006, Asif hit .250 with 1 home run. He had a 2-3 record in 15 appearances with a 5.77 ERA, starting 11 games that year. He pitched a complete game 9-5 win on April 12 against the Missouri Tigers where he allowed only 3 earned runs, walked 7 and struck out 5.

In 2007, Shah was listed on the Revised Brooks Wallace National Player of the Year Watch List. On the mound he had a 3.22 ERA in 89.1 innings of work and struck out 72 batters. He earned his first career save on February 17 against Jackson State. He hit .312 for the Redhawks as an outfielder/designated hitter with 50 RBIs. On March 28 against Freed-Hardeman University, Asif went 4 for 4 with a double, a grand slam, 6 runs batted in and scored 4 runs.

Shah signed with the Southern Illinois Miners in the Frontier League for the 2008 season, but was released during spring training. He then played for the Plaza Tire Capahas in the NBC World Series.

Asif started the 2009 season in the outfield for the Rockford RiverHawks back in the Frontier League. He hit .455 with 1 homer, 1 double, and 1 triple during spring training. He threw 2.0 innings giving up no runs, no hits, no walks and struck out one. After being released, Shah then moved to the Canada Miners in the Arizona Summer League where he hit .371 with 10 RBIs and 1 home run. Then Asif signed with the Long Beach Armada in the Golden Baseball League on July 29, 2009 where he got his first playing time as a professional. He eventually moved to the Chico Outlaws.

On February 3, 2010, the Normal CornBelters acquired Shah from the Chico Outlaws for future considerations.

Asif made his first appearance for the CornBelters in their very first game on May 21 against the Evansville Otters as a late-inning defensive replacement. His first start came against the Otters on May 23. He went 0 for 5.