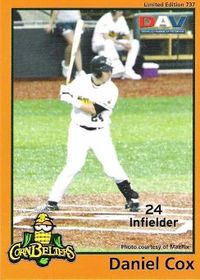 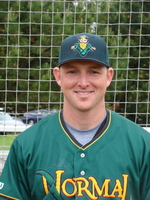 Daniel Cox has been an independent league infielder.

Cox attended San Jacinto Junior College for two years where he was 1st Team All-Conference at third base. He was nominated All-American, and was runner up NJCAA Defensive Player of the Year 2005.

He played third base for the Weatherford Wranglers, and was Texas Collegiate League All-Star 3rd Base in 2006.

Cox was signed by the Normal CornBelters on February 1, 2010. Daniel was the starter at third base for the CornBelters in their very first game on May 21, 2010 against the Evansville Otters at Bosse Field in Evansville, IN. Cox appeared in all 96 games for the CornBelters during the 2010 season. In that first CornBelters game, Daniel hit the first home run in CornBelters' history with 2 out in the 5th inning. It was a three-run blast.

Cox was second in the Frontier League in hitting with a .323 average, seventh in home runs with 15, and third in RBIs with 78.

This biographical article is missing the person's: birth place
Retrieved from "https://www.baseball-reference.com/bpv/index.php?title=Daniel_Cox&oldid=1046731"
Categories: