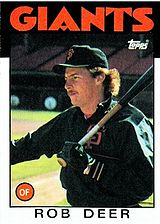 Rob Deer was long a favorite of statistic-minded baseball fans and has been held up as a model of the Three True Outcomes. A very solid contributor against lefties (.258/.373/.549), Deer was rarely a full-time player because of his inability to hit right-handers (.204/.303/.398).

Deer was a major bust in Nippon Pro Baseball, hitting just .151/.279/.297 for the Hanshin Tigers in 1994 with 8 homers and 76 strikeouts in 192 AB. He returned to the minors and spent two years in the Pacific Coast League, getting back to the majors briefly in 1996 with the San Diego Padres before ending his career.

In 1987 Deer became the first player to have over 100 more strikeouts than RBI. In 1991 he set a record with 95 more strikeouts than hits, set an RBI record for a player under the Mendoza Line, set a record for lowest average by a player who hit 20 homers and set the record for lowest average by a player with 400 or more at-bats. He struck out once every 2.56 at-bats, nearly breaking the record he had set with 2.55. He accomplished this despite missing 28 games, or he might have become the first 200-strikeout man ever.

Deer has the lowest batting average of any outfielder with over 2,000 AB. He was the prototypical home run, walk or bust type of player, he currently holds the record for the most home runs without reaching 1,000 hits in his career (230 home runs out of 853 hits). Mark McGwire holds the record for most home runs before his 1,000th hit with 311 before finally reaching the 1,000 hit mark in 1996. He also led his league in strikeouts eight times during his pro career despite only having 400 official at-bats seven seasons. In nine years with over 300 official at-bats, Deer struck out more than 100 times in each. He was in fact by far the easiest player to strike out in Major League history, having struck out once for every 2.75 at bats in his career (the next player on the list, Pete Incaviglia, "only" struck out once every 3.31 at bats). Although a master whiffer, he also accumulated a lot of walks due to his patient approach, taking pitches both in and out of the strike zone and ended his big league career with a decent .324 on-base percentage. His career OPS+ was an above average 109.