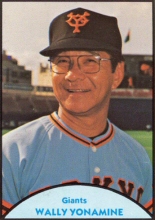 The third of seven Nisei children, Wally Yonamine was a major sports pioneer in both the U.S. and Japan. As a high school junior, Yonamine left his home to play football for Farrington High School in Honolulu; he was named league MVP. One day after graduating high school, Yonamine was drafted two months before World War II ended. Yonamine still spent a year and a half in the service, playing football, baseball and basketball for the army teams. In one game they beat the University of Oregon in football 64 to 13, with Yonamine doing almost all the scoring with a San Francisco 49ers scout in attendance.

After his military career ended, Yonamine had two choices - a football scholarship to Ohio State or a two-year contract with the 49ers. He was a halfback for the 49ers in 1947 as the first NFL player of Japanese descent. He was just one of six 49ers who never played college football. Fumbles limited his playing time as a rookie.

In the off-season, Yonamine broke his wrist during a baseball game. The 49ers released him before the 1948 season and Yonamine started to play baseball with the Hawaiian Warriors. In 1950, Lefty O'Doul, the manager of the San Francisco Seals, signed Yonamine and assigned him to their Salt Lake City Bees farm club in the Pioneer League. Yonamine hit .335, fourth in the league, scored 119 runs (3rd), stole 26 bases and drew 94 walks as an OF/1B.

O'Doul had originally planned in calling Yonamine up to the Seals in 1951 but Matsutaro Shoriki was looking to re-integrate Japanese baseball and Cappy Harada worked out a deal with O'Doul to send Yonamine to Japan. As a 26-year old with one season in class C, Yonamine had little chance of playing in the majors, and he agreed to go to the Yomiuri Giants. He became the first American to play in Japan since World War II (when several dozen Japanese baseball players had lost their lives, most notably Eiji Sawamura).

Though Yonamine had teammates who had served in the War, he says that they accepted him without a problem. He states that he felt more discrimination as a member of the powerful Giants than for his nationality. Yonamine's biggest rival was Tetsuharu Kawakami, his Giants teammate who he fought for a couple of batting titles. Yonamine helped introduce a hustling style of baserunning to Japan, which hadn't seen many players who slid or broke up double plays before Yonamine changed the game (much as Jackie Robinson had reintroduced aggressive baserunning to Major League Baseball). He stole home 11 times, a Nippon Pro Baseball record.

Yonamine hit .354/.441/.519 as a rookie in 1951 - he would have ranked second to Kawakami in average had he been among the qualifiers in playing time. Shigeru Chiba, who became Yonamine's close friend, taught him to foul off pitches. With Yonamine hitting leadoff and Chiba second, Wally recalls that they sometimes made pitchers throw 25 pitches to the first two batters of the game. He once fouled off 16 pitches in one at-bat. In 1952, he hit .344/.405/.498, stole 38 bases in 49 tries and scored 104 runs; he led the Central League in hits, doubles and runs and made the first of 7 consecutive Best Nines. Yonamine outhit Kawakami but Michio Nishizawa outdid them both, at .353.

The speedy outfielder began to fade in 1958, falling under .300 for the first time in his pro baseball career (.293) and making his final Best Nine. He was still productive in 1959, but declined drastically in 1960 and played another couple of seasons, retiring after the 1962 season. He spent his last two years with the Chunichi Dragons. Yonamine had made 8 All-Star teams in Japan. His career line in NPB was .311/.387/.445. His batting average is tied for 6th all-time in NPB history among players with 4,000 AB through 2005. Yonamine's 1,337 hits were a NPB record for a foreign-born player until 2008, when Alex Ramirez surpassed him. Due to his late start (a combination of military service, football time and minor league baseball in the USA) and his playing in a relatively low-offense era, Yonamine does not rank among the all-time leaders in any other stats.

After retiring, Yonamine was hired as a coach by the Dragons. In 1972 he became team's manager. In his third season as manager of the Dragons, he led the team to a Central League pennant, breaking the Giants' record of nine straight titles. Gene Martin comments that Yonamine had to deal with a major behavioral disturbance in Willie Davis. He had a record of 388-349 from 1972 to 1977, after which he went on to coach for the Giants, Nankai Hawks, Seibu Lions and Nippon Ham Fighters. After 38 years of duty in Japanese baseball, Yonamine became a scout. He met the emperor of Japan while working as a scout, and the empress showed Yonamine her batting stance.

In 1994 Yonamine made the Japanese Baseball Hall of Fame on the second ballot, going in at the same time as Sadaharu Oh. He became the first American player to make the Japanese Hall.