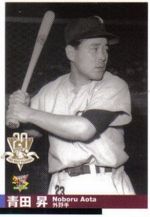 Returning to Yomiuri for 1948, Aota surged to bat .306/.332/.499 with 31 doubles, 25 home runs, 95 runs and 99 RBI. On October 14, he had 15 total bases, setting a new Japanese record (later broken). He led the JPBL in average (his only batting crown), hits (174) and homers (tied with Tetsuharu Kawakami). The batting race was a tough one as he was .001 ahead of Kazuto Tsuruoka and Makoto Kozuru at year's end. Aota was 9 RBI behind leader Fumio Fujimura to avoid a Triple Crown and was 5 runs behind leader Kazuo Kasahara. His 170 total bases led the circuit. He joined Kaoru Betto and Michinori Tsubouchi as the outfielders on the Best Nine team. Tsuruoka beat him out for MVP honors.

In 1951, Aota made the first CL All-Star team and hit .312/.378/.582 with 32 homers, 105 RBI and a career-high 101 runs. He stole 22 bases in 30 tries. He led the circuit in runs, homers, total bases (274) and RBI and placed 8th in average. It would be his only time leading in runs and second and last time leading in RBI. Kawakami won MVP honors instead. Aota made the Best Nine alongside fellow outfielders Iwamoto and Masayasu Kaneda. Aota was one of the Yomiuri veterans who helped reach out to Wally Yonamine, the first American to play in Japan following World War II. Aota only went 3 for 22 in the 1951 Japan Series but homered and scored four runs to help Yomiuri win the first of many Japan Series titles.

Once in the early 1950s, Aota bet 500 hundred yen that teammate Shigeru Chiba couldn't hit to left field; Chiba was known to always hit to right. In this instance, Chiba doubled to left. Aota then drove him home and said "I may have lost five hundred yen, but another RBItitle will increase my salary. So five hundred yen is nothing."

The Giants figured Aota's glory days were behind him given his off-year in 1952 and his party-hardy life off the field. They traded him to the Taiyo Whales. Aota did not respond well to his new environment, hitting .245/.300/.376 with only 9 home runs in 1953 and seemingly vindicating the trade. He still was voted onto the All-Star team.

In 1954, Aota had a resurgence, batting .294/.344/.542 and going deep 31 times. He led the league with 254 total bases and topped the circuit in slugging for the only time. He also won his third home run crown. Despite his comeback, he did not make the All-Star squad and missed the Best Nine.

Aota hit .268/.321/.467 in 1955, hitting 17 homers and making his 4th All-Star team. In 1956, the Taiyo slugger batted .259/.306/.442 with 25 home runs, most in the CL. His 65 RBI were just four behind league leader Andy Miyamoto in a pitching-dominated period of Japanese baseball. He joined Yonamine and Kenjiro Tamiya as the outfielders on the CL's Best Nine. He also finished second to Yonamine in voting for outfielders for the CL All-Star team.

Off the field, Aota was known to drink a lot and mix with a tough crowd, getting into fights at times.

Aota returned to the field as a manager in 1972, taking over the reigns of the Taiyo Whales from Kaoru Betto when the team was in third. They only went 1-14-2 under him as the club fell into a tailspin. He managed Taiyo for all of 1973; they finished 60-64-6, slightly ahead of the Hiroshima Carp to avoid last place.

His managing career over, Aota became a coach and was with Yomiuri in 1980 when he made a controversial statement in a tabloid that cost him his job.

This biographical article is missing the person's: death place
Retrieved from "https://www.baseball-reference.com/bpv/index.php?title=Noboru_Aota&oldid=888227"
Categories: