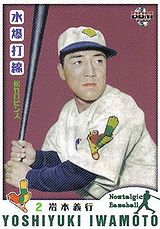 Yoshiyuki Iwamoto was an outfielder for ten years and manager for eight years in Japan.

Iwamoto was a pitcher at the 1931 Summer Koshien tournament, where he led Kouryo into the quarterfinals before losing to eventual champion Chukyo. After graduating from Meiji in 1934, he joined the corporate team Tokyo Club, which won the 1935 Intercity Baseball Tournament. Also on the team was future Hanshin Tigers and Korakuen Eagles manager Shigeo Mori. After the establishment of the Japanese Professional Baseball League in 1936, the corporate team's days were numbered and it disbanded in 1937.

Iwamoto then joined the pro league's newest team, Nankai, in 1938 and wore number 30. He didn't get into any games that year and was called up to serve in the military in 1939 and was not on the team's roster in that year. Iwamoto returned to Nankai in 1940 and would play with the club for the next three years hitting 7 home runs in 1941 and 1942 in pitcher-dominated seasons. Iwamoto managed Nankai for 23 games in 1942 in the interim between the firing of Hachiro Mitani and the hiring of Kisaku Kato. He was called up again to the military after the 1942 season. After the war Iwamoto played with All-Hiroshima and the Beppu-based Uera team where he served as player-manager.

This biographical article is missing the person's: death place
Retrieved from "https://www.baseball-reference.com/bpv/index.php?title=Yoshiyuki_Iwamoto&oldid=1244929"
Categories: