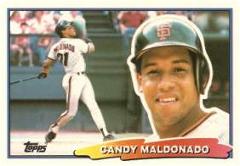 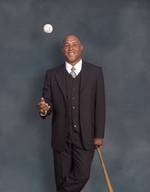 Candy Maldonado played 15 seasons in the big leagues, hitting 146 home runs. He was a regular on two teams that went to the World Series, the San Francisco Giants in 1989 and the Toronto Blue Jays in 1992.

Maldonado was signed by scout Ralph Avila. He broke in at a young age with the Los Angeles Dodgers in 1981, a tough team on which to find a job since they won the 1981 World Series and had outfielders such as Dusty Baker, Pedro Guerrero, Ken Landreaux, Reggie Smith and Rick Monday, with Rudy Law and Mike Marshall looking for jobs.

In 2011, Maldonado was enshrined into the Caribbean Baseball Hall of Fame along with Roberto Alomar, Carlos Baerga and Luis DeLeon. Candido had hit .333 with five homers and 17 RBI in 19 Caribbean Series games. Four of the homers came in the 1987 Caribbean Series, when he powered the Criollos de Caguas to the title but lost the MVP to teammate Carmelo Martínez. He later was an analyst for ESPN Deportes.