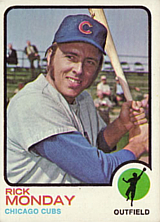 Rick Monday was a huge college star who went on to star in the big leagues for nearly two decades and later embarked on a successful broadcasting career. The original first overall draft pick in 1965, Monday may be best known for Blue Monday (as it's known in Montreal), his game-winning blast in the 1981 NLCS off Steve Rogers, and saving an American flag from being set ablaze at Dodger Stadium.

Monday spent 1965 and most of 1966 in the Kansas City Athletics minor league chain, slugging around .490 at both Lewiston, in Single A, and Mobile, in Double A.

Rick was with the Athletics for 5 years, as they moved from Kansas City to Oakland. His teammates in Oakland included Sal Bando, his old teammate from college, as well as Reggie Jackson, who had gone to Arizona State the year after Monday left. Oakland went from a lousy team to a first-place team while Monday was there, but Monday was gone by the time Oakland won the World Series three straight times from 1972 to 1974. 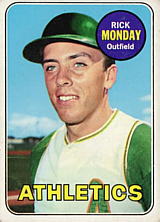 With the Chicago Cubs from 1972 to 1976, he played in a friendlier ballpark than the one in Oakland, and his power stats went up. His peak home run total was 32 in 1976, and he scored 107 runs that season batting in the leadoff spot in the order. He continued to strike out a lot and endured chronic back problems which interfered with his play.

He spent the rest of his career, from 1977 to 1984, playing for the Los Angeles Dodgers, never getting as many as 400 at-bats in a season. He contributed to a successful team, as the Dodgers went to the World Series in 1977, 1978 and 1981, and won the Series in 1981. Monday's stats in 1981 were notable, as he hit .315/.423/.608 in 66 games during the regular season. After the Dodgers won the West Division, they faced the Montreal Expos in the 1981 National League Championship Series, where Monday hit the game-winning home run off Steve Rogers in the 9th inning of Game 5 to give the Dodgers the 2-1 win and advance to the World Series against the New York Yankees. This also prompted the infamous phrase, "Blue Monday", in the eyes of Expo fans. He started several games of the 1981 World Series, usually batting seventh in the lineup, behind Steve Garvey batting third, Ron Cey batting fourth, Dusty Baker batting fifth, and a young Pedro Guerrero usually batting sixth. He also appeared in the championship series in 1983, when the Dodgers yet again won their division.

Lifetime, he slugged 241 home runs in his major league career, along with 924 walks, which gave him a career OBP of .361. The 241 home runs rank him in a tie for 254th all-time, through 2019, with Jesse Barfield and Cecil Cooper. Kirk Gibson, another outfielder connected with the Los Angeles Dodgers of the 1980s, is one of the two most similar players to Monday, based on the similarity scores method.

Monday also was one of the few players to dominate Tom Seaver, batting .349 (30 for 86) with 11 home runs against Tom Terrific. Those 11 homers were the most of any player off the Hall of Famer.

During a 1976 game at Dodger Stadium, Monday grabbed an American flag from two protesters who were about to set it on fire in center field. It became a highly-publicized incident, at a time when the Vietnam War had just ended and when conservatives were looking for something to cheer about. The incident is often referred to as "Rick Monday Saves Old Glory".

He has been a broadcaster for the Los Angeles Dodgers since 1993, currently providing play-by-play on the radio, and has been a sportscaster since 1985.