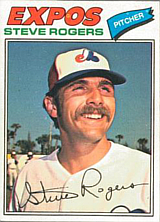 Steve Rogers was one of the top-flight pitchers of the National League from the late 1970s through the early 1980s. He was widely credited with having outstanding stuff, and a tenacious drive and desire. He spent his entire career with the Montreal Expos and is the only player with a career lasting more than five seasons to have done so.

Rogers won Silver with Team USA in the 1969 Amateur World Series. He came on with a bang as a rookie in 1973, after being called up in July, as his 1.31 ERA over his first 14 career starts is the lowest ever for a pitcher, ahead of Tiny Bonham (whose ERA was 1.67 during the same span). He finished his rookie year with a 10-5 record and a 1.54 ERA and made the 1973 Topps All-Star Rookie Team. His outstanding performance was one of the keys to the young Expos still being in the pennant race in the NL East until the final week of the season, before finishing 4th. The following season, in 1974, he was the Expos' lone representative at the 1974 All-Star Game, but suffered a lot of defeats in the second half, ending up with a record of 15-22, 4.47. His 22 losses were tied for most in the National League with Bill Bonham and Randy Jones. It was the first of five All-Star nominations for Rogers, who was the starter in the 1982 classic, which was played in his home ballpark of Stade Olympique.

He had some bad luck in his sole appearance in the playoffs, as he is most remembered for surrendering the home run to Rick Monday that gave the Los Angeles Dodgers the 1981 National League pennant in the 9th inning of Game 5 of the 1981 NLCS. Prior to surrendering that home run (in a rare relief appearance), he had started and won three games in the 1981 Postseason, including twice beating future Hall of Famer Steve Carlton of the Philadelphia Phillies in head-to-head matchups in the Division Series, not counting his run of success to get the Expos in the playoffs to begin with. He is the all-time franchise win leader with 158 and holds a slew of other franchise pitching records. He made nine Opening Day starts for the Expos, the most of any pitcher during the franchise's run, with a record of 2-4 and 3 no decisions.

In 2004, Rogers was a special assistant for the MLBPA.