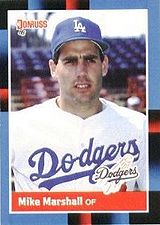 Mike Marshall is one of two players by that name to become stars with the Los Angeles Dodgers. Confusingly enough, the other Mike Marshall, a pitcher, was still active in the 1981 National League when this Mike came up. This Mike, an outfielder, played 11 seasons in the majors and hit 148 home runs. He was on the All-Star team in 1984, and also appeared on the winning team in the 1988 World Series.

Born in 1960 in Libertyville, IL, north of Chicago, he went to high school in Buffalo Grove, IL a bit closer to Chicago. He was signed as a 6th round pick in the 1978 amateur draft by the Los Angeles Dodgers and scout Glen Van Proyen. Scott Sanderson, from nearby Northbrook, IL, had been drafted the year before by the pros.

Marshall moved up the ladder in the Dodgers organization, playing at Lethbridge, Lodi, San Antonio, and Albuquerque. He always hit well (see awards below), but his two years at Albuquerque were great, as he hit .373/~.443/.675 and then .388/~.483/.639 in 1981 and 1982. He was named Minor League Player of the Year by both The Sporting News and Baseball America (awarding the distinction for the first time) for his great 1981 season at Albuquerque, where he won the Pacific Coast League Triple Crown. He came up for 14 games with the Dodgers in 1981, and appeared in the Division Series but not in the League Championship Series or the World Series.

In 1988, when the Dodgers won the World Series, he led the team during the regular season with 82 RBI, and was second on the team with 20 homers, behind Kirk Gibson.

After being traded from the Dodgers, he was briefly with the New York Mets and then with the Boston Red Sox, appearing in the 1990 Championship Series with them. He closed out his career playing two games with the California Angels at the end of the 1991 season.

One of the most similar players to Marshall is Don Demeter, another player who started his career with the Dodgers.

He and Belinda Carlisle, lead singer of the new wave band the Go-Go's, were an item for a while.

Marshall played for the Nippon Ham Fighters in 1992.

He managed the Albany-Colonie Diamond Dogs of the Northern League from 2000 to 2002 and the El Paso Diablos of the American Association from 2005 to 2006. In 2011, he made national news while managing the Chico Outlaws of the North American League, when on August 9th, he got into a fight with 52-year-old former major leaguer Tony Phillips, who was playing third base for the opposing Yuma Scorpions. The fight got violent and degenerated into a bench-clearing brawl. Both Phillips and Marshall received three-game suspensions for their actions.