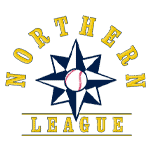 Like most geographically-named leagues, there have been multiple "Northern Leagues" in baseball history. Since the beginning of the Twentieth Century, four leagues have shared the name.

The first Northern League was a class D league centered in the Dakotas and Canada and was in operation from 1902 to 1906. In 1904 the season was shortened on August 8. The league merged with Copper Country Soo League on May 25, 1906 to form the class C Northern-Copper Country League. This league lasted 2 years before folding.

A new class D Northern League was formed in the same region in 1908, but folded after one season.

Another Northern League lasted from 1913 to 1917. The league consisted of teams formerly of the Central International League and was a class C league from 1913-1916 and was demoted to Class D in 1917. The league ceased operations on July 4 due to World War I.

The longest-lasting Northern League ran from 1933 to 1971 with a break during World War II. One of the few leagues started during the Depression, former major-leaguer Bruno Haas was the key individual in organizing the new circuit. Cities like Duluth and Winnipeg, members of the original Northern League, were long-standing members of this edition. The league was one of the few to die off in the 1970s after surviving the attrition-heavy 1950s. Perhaps the most famous player in Northern League history was Hank Aaron, who was the league's rookie of the year in 1952. Other notable players included Hall of Famers Orlando Cepeda, Lou Brock, and Jim Palmer.

The most recent incarnation was created in 1993 through the efforts of new commissioner Miles Wolff. Wolff started the league after many midwestern cities contacted him (through his affiliation with Baseball America) asking how they could get a minor league team. After visiting some of them, most notably Wade Stadium in Duluth, he started contacting potential owners to start the league.

In fact the league was, overall, quite a success with only one franchise, Rochester, failing to attract significant crowds. The ailing Aces franchise was sold to an owner in Winnipeg, Manitoba (Sam Katz) and renamed the Winnipeg Goldeyes.

Part of the success of the league may be the structure of the teams with both salary caps and roster rules. Teams were permitted no more than 4 veterans (5+ years professional experience) and required to have at least as many rookies. The rest of the rosters were made up of players with various years of experience (listed as LS-1 to LS-5 for "limited service).

The league expanded from six to eight teams with the addition of franchises of the Fargo-Moorhead RedHawks (Fargo, North Dakota) and Madison Black Wolf (Madison, Wisconsin). After the 1998 season, the Whiskey Jacks, originally with the second best attendance in the league, was sold and became the Schaumburg Flyers (Schaumburg, Illinois) in 1999.

When the four-year agreement ended at the conclusion of the 2002 season, the relationship between the two leagues was ended. The Northeast League was re-established as a separate league (which later reformed as the Canadian-American Association). It was the final year that Miles Wolff remained associated with his creation. Mike Stone replaced him as league commissioner, while Wolff moved East.

In 2004, expansion to Alberta was announced, which created the Calgary Vipers (Calgary) and Edmonton Cracker-Cats (Edmonton) doubling the size of the league over 12 years.

After the 2005 season, the St. Paul Saints, Sioux Falls Canaries, Lincoln Saltdogs and Sioux City Explorers left the Northern League to establish their own independent minor league, called the American Association. The Northern League played the 2006 season as a two-division, eight-team league. After the 2007 season, the two teams from Alberta, Calgary and Edmonton, announced that they were leaving the league. They joined the Golden Baseball League, which was somewhat closer geographically.

Over its 18 seasons, over two dozen players were signed from the Northern League to play in major league baseball. These include players such as J. D. Drew, Kevin Millar, Jeff Zimmerman and Rey Ordoñez. Several former MLB players have played in the league including Dennis "Oil Can" Boyd, Darryl Strawberry, Jack Morris, Pedro Guerrero, and Leon "Bull" Durham. Former MLB players and coaches have also coached or managed in the Northern League including Terry Bevington, Hal Lanier, Wayne Terwilliger, Matt Nokes, and "Dirty" Al Gallagher.

Following the 2010 season the league officially merged with the United Baseball League and Golden Baseball League to create the North American League. Only one team would join the North American League in its first season though, the Lake County Fielders. Schaumburg and Rockford were proposed but faced stadium issues and were not able to join the league; Schaumburg went on hiatus for a year, while Rockford returned to the Frontier League, accompanied by Joliet. Four other teams (Fargo-Moorehead, Gary, Kansas City, and Winnipeg) left to join the American Association

The Northern League played a 96-game split season schedule from late May until early September. The division winners in each half qualified for the post-season, though if a team won both halves, the team with the best overall record, regardless of division, qualified as a wild card. Both the league semi-finals and Championship Series were best of five.

During the season, rosters were limited to 22 players, broken into seven classes based on a players years of service. One year of service was defined as one National Association (affiliated) season, or two independent league seasons.

The rest of 1904 season was cancelled on August 8.