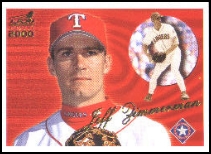 Jeff Zimmerman played youth and high school baseball in Alberta, well enough to play in junior college and eventually star for the 1993 Texas Christian University team. Undrafted, Zimmerman spent several years with Team Canada. In the 1994 Baseball World Cup, he was 0-1 with a 4.87 ERA in 3 games as Canada's workhorse, throwing 20 1/3 of the club's 62 innings.

Looking for a baseball job in 1993, Zimmerman was advised to join the Barracudas de Montpellier by Greg Hamilton, the pitching coach for Team Canada. Zimmerman signed on with the French team and perfected his slider while in France. The new pitch enabled him to earn interest from teams in the Americas.

Zimmerman said "I had a blast [in France]. It was great for my ego, because I got to be Babe Ruth and Nolan Ryan all rolled up in one." Zimmerman helped the Barracudas win the Division Élite title. He was the only player to appear in both Division Élite and the major leagues until Harvey Garcia followed him (2007 MLB, 2016 France).

He eventually wandered into the independent Northern League in 1997, where he struck out 140 batters in 118 innings. Texas scouts remembered him from his Fort Worth Cats days, and Zimmerman signed with the Texas Rangers. He overmatched minor league competition at three levels in 1998, and in 1999, as a rookie, was an American League All-Star as the Rangers' set-up man.

In 2001 Zimmerman saved 28 games as the Rangers' closer, and then his career ended as suddenly as it had begun, with a devastating elbow injury. Zimmerman retired in 2006, after rehabilitating from the 2001 season through the end of the 2005 season and undergoing two Tommy John surgeries, but attempted a comeback in 2009. After a tryout and passing a physical, the Seattle Mariners signed Zimmerman to a minor league contract, and he reported to extended spring training.

Zimmerman holds a bachelor's degree from TCU and an MBA from Simon Fraser University in British Columbia. He is the brother of Jordan Zimmerman, who was his teammate on Team Canada.

Sources include Baseball in Europe by Josh Chetwynd