In 1955 the Arizona-Texas League became the Arizona-Mexico League. The circuit continued only four more seasons before the class C league bid adieu to baseball. During these four seasons more than 1,700,000 fans went through the gate. The Cananea Mineros was the only team to win more than one league title, taking two back to back, in 1955 and 1956. They drew 347,247 fans those two years.

An independent league of the same name was founded in 2003 and lasted two weeks before shutting down. Three weeks prior to the start of the season Ciudad Juarez Hawks of Ciudad Juarez, Chihuahua were moved to Tecate, Baja California and became the Tecate Cerveceros. The highest profile player was former MLB outfielder Chuck Carr who signed with Bisbee-Douglas as a player/coach on May 7. The league folded on June 17 after both the Bisbee-Douglas Copper Kings and Nogales Charros ran out of money. 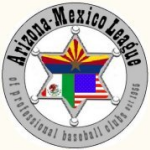