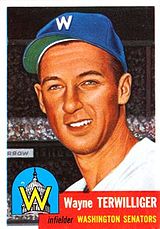 In a career that has spanned seven decades, Wayne "Twig" Terwilliger was signed out of Western Michigan College by the Chicago Cubs in 1948. Playing for the Los Angeles Angels in the Pacific Coast League in 1949, he was called up to Chicago in August. He was traded to the Brooklyn Dodgers partway through the 1951 season and backed up Jackie Robinson at second base that season. After spending the 1952 season in the minors, he was the starting second baseman for the Washington Senators in 1953 and 1954. He hit a career-high .252 with 24 doubles and 64 walks that first year in what was his most productive season in the majors. He also played for the New York Giants and Kansas City Athletics.

"Twig" managed 12 minor league teams, winning 1224 games. Most recently he managed the Ft. Worth Cats and in 2005 won the league championship of the Central Baseball League. He retired as manager but returned as first-base coach. He planned to return in 2008 for his 60th season in professional baseball.

In 2006, he published his autobiography entitled: Terwilliger Bunts One