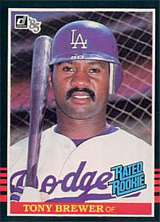 Tony Brewer, the 1984 Pacific Coast League batting champion, played part of one season in the majors, with the Los Angeles Dodgers in 1984, and later was successful in Japan.

Brewer attended the University of Miami at the same time as Neal Heaton. He was signed by the Dodgers as a free agent in 1979. Much of his minor league career was spent with the Albuquerque Dukes, where, in addition to hitting .357 in 1984, he also hit .315 in 1983. He primarily played left field for the Dodgers, where the regular was Mike Marshall. Brewer came up for the first time in August 1984 and, in his last major league at-bat, he hit a home run. He also played four years in Japan, slugging 99 home runs and hitting .307.

He coached the Palo Alto High School baseball team in California and also participated in Dusty Baker's baseball clinic in Sacramento. He is the brother of Mike Brewer and was born in Coushatta, Louisiana. The only other major league player born there was Joe Adcock.