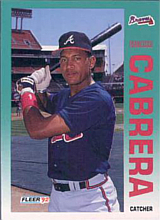 Francisco Cabrera only played briefly in the majors, but his multitude of heroics are memorable for many Atlanta Braves fans.

Originally signed as an amateur free agent by the Toronto Blue Jays and scout Epy Guerrero on September 17, 1985, Cabrera reached the majors with the Jays in July 1989. Exactly a month later, after appearing in 3 games for Toronto, he was dealt to the Braves in an ultimately shrewd move, the Braves only surrendering middle reliever Jim Acker in return.

Cabrera spent each of the next three seasons shuttling between Atlanta and the AAA Richmond Braves. Stuck behind several veterans, he was unable to crack the lineup on a a regular basis. He saw his most at at-bats in 1990, batting a rock solid .277/.301/.482 with 7 home runs in 137 at-bats. He chipped in 4 more in 1991, with his largest coming in the heat of an NL West race. On August 21st, Cabrera dug in against Cincinnati Reds relief ace Rob Dibble. The Braves were trailing, 9-6, with two outs in the 9th and David Justice and Brian Hunter aboard. Cabrera promptly took Dibs deep, his second home run of the game, tying a game the Bravos would win, 10-9, in 13 innings. Pulling 2 1/2 games behind the Los Angeles Dodgers, the victory began a 29-12 streak down the stretch that propelled the Braves to a division title and eventual World Series appearance, bowing to the Minnesota Twins (and Jack Morris) in seven games.

After appearing in just a dozen games in 1992, cracking 2 home runs in 10 at bats for a .900 (!!!) slugging percentage, Francisco was added to the postseason roster for his ability to catch, play first base, and pinch hit. On October 14th, in Game 7 of the NCLS against the Pittsburgh Pirates, he had a single at bat that will long be remembered. Pinch-hitting against Bucs stud reliever Stan Belinda, Cabrera singled through the left side of the infield. Sid Bream, one of the slowest men in baseball, scored from second base on the hit, sending the Braves to a 3-2 win and their second World Series in a row, bowing once more, this time to the Toronto Blue Jays (and old pal Jack Morris, who the Braves beat twice this time) in six games.

Cabrera was with Atlanta for the entirety of 1993, but got only 83 at-bats. He once again flexed his muscles in the postseason, going 2-for-3 with an RBI in the NLCS against the Philadelphia Phillies. That proved to be his final big league appearance, as he spent 1994 with the Orix Blue Wave in Japan, followed by several years in the minors and independent ball.