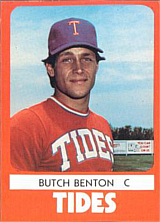 "Throughout his major league career, [Butch] Benton had made a number of baseball executives uncomfortable with his strict adherence to the teachings in the Bible. Moreover, Benton would very effectively spread the word of the Gospel. On his major league teams he would hold prayer meetings and discuss the Bible with any teammate who would listen... It may well have been that Butch Benton's conversion to Christianity ended his chance of playing regularly in the big leagues." - Peter Golenbock, in his book The Forever Boys about the Senior Professional Baseball Association

Butch Benton was the sixth player taken in the 1975 amateur draft, which became notorious for its lack of quality major league players in the first round, by the New York Mets. He had two brief looks with the Mets, in 1978 and 1980, going 3 for 25 in 16 games. The Mets gave up on him as a prospect, and he played for five other organizations in his career, spending most of his time a good defensive Triple A catcher who did not hit enough to earn a job in the big leagues. He did return to the majors for two more stints, a four-game look by the Chicago Cubs in 1982, and his biggest chance to play, 31 games with the Cleveland Indians at the start of the 1985 season. He hit just .143 with the Cubs and .179 for the Indians, and that was it for his big league career. The Indians released him before the start of spring training in 1986, and that seemed to be the end of the road. He did hit well enough in the minors in the second half of his professional career, as he put up a .330 batting average in 70 games for the Iowa Oaks in 1982, then followed with a .298 average and decent power in 125 games with the Wichita Aeros in 1983. He hit .280 and .283 in his last two full minor league seasons, although his slugging and on-base percentages were only mediocre.

In 1989, Butch played for the St. Petersburg Pelicans of the SPBA, hitting .374 with 34 RBI. In 1990, Benton again played for the Pelicans: in 21 games he was batting .353 and was tied with Rick Lancellotti and Ron Roenicke for the league lead in home runs with 5. He also had 15 RBI and was leading the league with 54 total bases when the SPBA folded. Since the Senior League age limit for catchers was more generous than for other players, he was still only 33, an age at which he could interest someone, and the Detroit Tigers gave him another shot in 1991. He played 9 games for the Toledo Mud Hens, hitting .133, then retired for good.