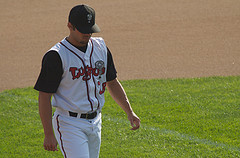 Pitcher Graham Godfrey was selected by the Toronto Blue Jays in the 34th round of the 2006 amateur draft after going 8-2 with a 3.57 ERA and over a strikeout per inning at the College of Charleston. He was signed by scout Marc Tramuta and made his pro debut the following summer with the Lansing Lugnuts, going 6-7 with a 3.98 ERA in 21 starts. Following that season, he was traded along with Kristian Bell to the Oakland Athletics for Marco Scutaro.

In 2008, he pitched for the Stockton Ports (5-8, 5.10) and Sacramento River Cats (3 R in 6 2/3 IP). His 123 strikeouts were fifth in the A's farm chain. The next year, Godfrey was 11-8 with a 3.50 ERA for the Midland RockHounds. He He led the Texas League in innings pitched and was 7th in ERA. He made the TL All-Star team, joining Jhoulys Chacin, Samuel Deduno, Trey Hearne, Andrew Johnston, Lance Lynn and Trevor Reckling as selected pitchers.