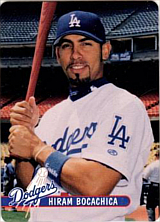 Hiram Bocachica played in the major leagues over parts of eight seasons, earning most of his major league at bats in 2001 and 2002 as a spare part with the Los Angeles Dodgers. Hiram played center field more than any other position, but also played a fair number of games at third and second, making him a versatile infielder/outfielder. In 2006, he was the top hitter on the Sacramento River Cats of the Pacific Coast League, hitting .326 with a .595 slugging percentage in 74 games. His 19 home runs were second on the team behind minor league journeyman Scott McClain, who had 28 home runs in 140 games. He also slugged over .550 in Triple A in 2000 (in 124 games) and in 2004 (in 40 games).

Bocachica signed with the Seibu Lions in December of 2007, spending two years in Japan's Pacific League. He played for Puerto Rico in the 2009 WBC. Bocachica became a manager with the AZL Athletics Gold in 2019, and was scheduled to coach the Las Vegas Aviators in 2020 before the season was cancelled due to Covid-19. Moving to the Texas Rangers' organization, he was a coach for the Hickory Crawdads in 2021.

This manager's article is missing a managerial chart. To make this person's article more complete, one should be added.
Retrieved from "https://www.baseball-reference.com/bpv/index.php?title=Hiram_Bocachica&oldid=1212733"
Categories: