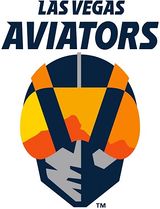 The Las Vegas Aviators, of the Pacific Coast League and briefly in Triple-A West, went from shunned to sought-after with a new playpen in 2019. The Oakland Athletics farmhands play their home games at Las Vegas Ballpark in Las Vegas, NV.

In connection with the move, the club changed its brand from Las Vegas 51s. The new nickname salutes Howard Hughes, an early pilot and successful entrepreneur whose company bought the club in 2013 and broke ground for the privately funded ballpark in 2018.

After the New York Mets escaped parenting far-off Vegas by buying the Syracuse Chiefs, the then-51s signed the first new affiliation of the 2019-2020 cycle with the A's.

Vegas has emerged as the A's' most likely landing spot if they can't get a stadium deal in Oakland, CA. That is no foregone conclusion, with indications both ways. The A's want a ballpark to be part of a multi-billion-dollar redevelopment in the Jack London Square area, but until all I's are crossed and T's are dotted, the A's are also exploring multiple options - all in Vegas. A Vegas landing would complete a great turnaround from 2013, when then-MLB Commissioner Bud Selig said Vegas would "never" have big-league baseball because of its ties to what he called the "sin" of gambling.

The franchise settled in Vegas, as the Las Vegas Stars, when the Portland Beavers moved there in 1983. Now on their third nickname and second stadium, they broke their Vegas season attendance record on the 42nd date of 2019 and totaled a minors-topping 650,934 spectators including 43 sellouts.