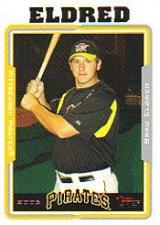 Brad Eldred was tied for second in NCAA Division I in home runs in 2002, with 29. He was drafted by the Pittsburgh Pirates in the 6th round of the 2002 amateur draft. He was signed by scout Delvy Santiago and made his pro debut with the Williamsport Crosscutters that summer.

Eldred was a minor prospect his first two years in the Pittsburgh Pirates farm system, slugging around .500 with a mediocre OBP and lots of strikeouts. He had a breakout year in 2004 - he hit .310/397/.570 for the Lynchburg Hillcats and was named Carolina League MVP despite spending a third of the year in AA with the Altoona Curve. After a slow start for the Curve, Eldred established himself as a prospect by driving in 50 in his last 27 games - overall for Altoona he hit .279/.329/.687. In 147 AB, he had also fanned 51 times while drawing just six walks. On the year he drove in 137 in 130 games, homered 38 times and struck out 148 times. The Pirates' Dave Littlefield turned down an offer of Ryan Howard from the Philadelphia Phillies for Kris Benson because they felt Eldred was similar to Howard and having two power prospects would be redundant.

The Pirates, concerned with Eldred's swing, returned him to AAA in 2006, trading their top pitcher in 2005 (David Williams) to the Cincinnati Reds for Sean Casey and installing Casey at first. When Casey was injured, the team left Eldred at AAA and instead called up utility man Mike Edwards. Shortly thereafter, Eldred was himself injured, in a collision with a baserunner, and required surgery that would keep him out for the remainder of the season. After all the tinkering with his approach, he had begun the 2006 season in poor form, hitting .226/.310/.484 with 18 strikeouts in 62 AB over 18 games. He had hit only three home runs.

Brad was assigned to the Grand Canyon Rafters of the Arizona Fall League, having finally recuperated. He only batted .231/.311/.354 with 1 HR in 65 AB for Grand Canyon. He was then sent to the Escogido Lions, where he was expected to play regularly, but went only 1 for 18 with 10 strikeouts and Escogido lost all 6 games he appeared in. They cut him loose.

After a quick start in spring training in 2007, Eldred was moved to the outfield to increase his versatility and his chance of winning a roster spot. First base was claimed by off-season acquisition Adam LaRoche and manager Jim Tracy preferred bench players to be able to man multiple positions. Eldred hit .303/.403/.667 in Grapefruit League play and made the team's roster. His 6 homers tied him for third-most in spring training behind Aramis Ramirez and Scott Hairston.

After a .119/.140/.286 batting line in 18 games, Eldred was sent down to Indianapolis in late May. The team had brought Humberto Cota off of the disabled list and Ryan Doumit, who could play 1B/RF like Eldred, had excelled while Cota was out and could not be sent back down. He briefly returned to Pittsburgh for one game in June after Danny Kolb was designated for assignment. In effect, Brad took the bench slot of Don Kelly. When the team claimed Josh Phelps off of waivers, this role went to Phelps, and Eldred was back with the Indians. Eldred had a very bad season, hitting .209/.275/.399 in 86 games for Indianapolis.

Eldred signed with the Chicago White Sox for 2008. He spent all season with the minor league Charlotte Knights, hitting .244/.305/.546 with 35 home runs, 100 RBI, 28 walks and 144 strikeouts. He led the 2008 International League in homers and RBI. His 10 errors tied Randy Ruiz for the lead among IL first basemen. Eldred made the IL All-Star team as the DH. Eldred paced all White Sox farmhands in home runs, RBI and strikeouts.

In 2009, Brad moved to the Washington Senators chain and again spent all year at AAA. He hit .269/.344/.487 with 17 home runs for their Syracuse Chiefs affiliates. With the Colorado Rockies in 2010, he spent most of the season with the Colorado Springs SkySox in the Pacific Coast League, where he hit .264 in 106 games, with 27 doubles, 30 homers and 84 RBI. In 10 games in the major leagues, he hit .250 with a homer and 3 RBI. He finished among the 2010 Pacific Coast League leaders in homers (5th, between Chris Carter and Mike Carp), RBI (tied for 10th with Brett Pill) and slugging (7th, between Brad Snyder and Bryan LaHair). Eldred played for Team USA in the 2010 Pan American Games Qualifying Tournament, helping the country win spots in both the 2011 Baseball World Cup and 2011 Pan American Games. For the tournament, he hit .256/.300/.436, playing DH with Eric Hosmer being used at first base.

He moved to the San Francisco Giants organization in 2011 but did not make it back to the big leagues, spending the season with the Fresno Grizzlies, back in the PCL. He played 112 games, batting .278/.351/.536 with 23 homers and 57 RBI. In his last 4 AAA seasons, with four different organizations, he had slugged over .500 three times (with the other season at .487), but had barely seen any action in the big leagues. He was now at 230 homers in 10 minor league seasons.

In 2012, Brad changed organizations again, going to the Detroit Tigers. On paper, it was not a great move, given the Tigers had signed free agent 1B Prince Fielder to a huge contract in the off-season, and also had Miguel Cabrera on the roster, but it turned out better than expected. He was scorching hot playing for the Toledo Mud Hens at the start of the season, hitting .388 with 9 doubles and 13 homers over his first 20 games, driving in 35 runs with a head-spinning 1.013 slugging percentage. He was easily leading the 2012 IL in home runs (4 ahead of Will Middlebrooks), RBI (9 ahead of Middlebrooks) and both slugging and OPS (each over 200 points ahead of Middlebrooks). On April 26th, the Tigers released long-time fixture Brandon Inge and called up Eldred, indicating they would use the slugger as their designated hitter. However, he only played 5 games for the Bengals, going 3 for 16 with a double and a homer, and was sent back to the minors. He ended up playing 63 games for Toledo, hitting .305 with 18 doubles, 24 homers and 65 RBI, then was released on June 19th so he could play in Japan. He finished the year with the Hiroshima Carp of the Pacific League, where he hit .262 with 10 doubles, 11 homers and 35 RBI in 65 games.