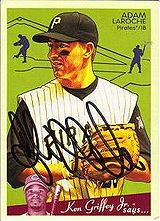 The son of Dave LaRoche and brother of Andy LaRoche, Adam LaRoche was a first baseman.

LaRoche was the Most Outstanding Player in the Junior College World Series in 2000. The Atlanta Braves took him in the 29th round of the 2000 amateur draft and assigned him to the Danville Braves. He was considered a better pitching prospect as an amateur, but the Braves decided to give him a chance to hit and it worked out. He hit .308/.381/.507 in 56 games for Danville and led the club in homers (7) and RBI (45).

LaRoche was named the Braves' Minor League Player of the Year after a big 2003 campaign. He led the team's minor leaguers in homers (20), RBI (72) and total bases (235). He hit .283/.381/.511 for the Greenville Braves and .295/.360/.466 for the Richmond Braves. He went 1 for 2 as the USA's starting first baseman in the 2003 Futures Game before being replaced by Ryan Howard. Baseball America rated him the top defensive first baseman in both the Southern League and International League. They also rated him the 7th-best first baseman prospect in baseball, the #12 prospect in the SL behind Khalil Greene and the #6 prospect in the IL, between Freddy Sanchez and Brandon Claussen.

In 2004, LaRoche played four games with Richmond but spent most of the season as the regular first baseman for the Braves. Splitting the role with Julio Franco, Adam hit .278/.333/.488 despite being plagued by a dislocated shoulder partway through the year. He made the 2004 Topps All-Star Rookie Team. He then batted .235/.316/.471 in the playoffs.

Adam fell to a .259/.320/.455 line with the 2005 Braves. He showed improved power with 28 doubles, 20 homers and 78 RBI but his 98 OPS+ was clearly insufficient for a first baseman. He did go 4 for 8 with a double, home run and three walks in the post-season. In 2006, LaRoche went onto medication for attention deficit disorder, which he had suffered with for years and attributes his significant improvement in part to this change. Overall, Adam batted .285/.354/.561 for a 133 OPS+ and he finished 10th in the 2006 NL in slugging percentage.

The Pittsburgh Pirates expressed interest in LaRoche throughout the winter of 2007 and acquired him in a deal with Jamie Romak in exchange for Mike Gonzalez and Brent Lillibridge. The general opinion was that the trade benefited both teams.

LaRoche began 2007 very slowly, not reaching the Mendoza Line until mid-May, though he had been showing some power and leading the Pirates in walks. Adam lost a bet with Tom Gorzelanny that the pitcher would not get a hit by the end of May; Gorzelanny was to have bought LaRoche a driver for his golf game had he lost. Instead, LaRoche had to buy Gorzelanny free golf outings for the rest of the season. LaRoche said it was a bet he wanted to lose. LaRoche finished the year with a .272/.345/.458 batting line with 42 doubles, 21 home runs and 88 RBI for a 108 OPS+, a big drop from 2006 and a return to his previous career norms.

When Adam appeared on the same field for the same team as brother Andy on August 14, 2008, the two became the first brother combination on the Pirates in 50 years, since Eddie O'Brien and Johnny O'Brien. The LaRoches were the 8th brother combo for Pittsburgh - the other 7 sets were the O'Briens; Harry Camnitz and Howie Camnitz; Gene Freese and George Freese; Paul Waner and Lloyd Waner; Johnny Morrison and Phil Morrison; and Elmer Riddle and Johnny Riddle. LaRoche continued his trend of slow starts and hot finishes, overall producing a .270/.341/.500 batting line with 32 doubles, 25 homers and 85 RBI with a 123 OPS+.

On May 13, 2009, LaRoche became the first player in major league history to have a home run call reversed thanks to instant replay. Umpire Lance Barksdale initially called a shot by Adam a homer but it was called a double on review. LaRoche said: "I would've been shocked if it had stayed [a home run]." On June 17th, Adam and Andy both homered in the same game, the first brother combo to go deep together for Pittsburgh since the Waners back in 1938. LaRoche actually began 2009 on a strong note and faded over the next couple of months, a reversal of his past trends; he was hitting .247/.329/.441 after 87 games for a 108 OPS+ and his 25 doubles were among the NL leaders. Pittsburgh then dealt him to the Boston Red Sox for Argenis Diaz and Hunter Strickland. He barely stayed a week in Boston before moving again, being sent to the Atlanta Braves at the trading deadline on July 31st in return for Casey Kotchman in a swap of first basemen. 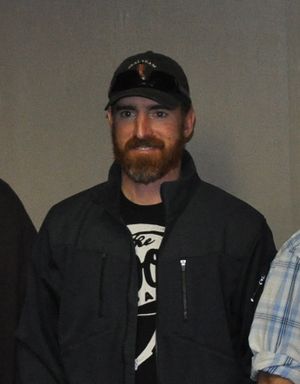 In 2010, LaRoche signed a free agent contract with the Arizona Diamondbacks becoming the team's starting first baseman. After one season in Arizona, where he topped 100 RBI for the first time, he moved to the Washington Nationals in 2011. It was a difficult first year in the nation's capital however. He went to spring training bothered by a labrum tear in his left shoulder, but elected to play through the pain. The pain got worse as the season advanced however and he went on the disabled list on May 23rd, batting only .172. After undertaking strengthening exercises, he was hoping to resume playing baseball in mid-June, but doctors recommended surgery instead, which was performed on June 16th. That wiped out the remainder of his season.

LaRoche made a tremendous comeback in 2012 however, as the Nationals surged to a first-place finish in the NL East. He was able to reclaim his first base job because of injuries to Mike Morse and Jayson Werth, and filled the power gap in the middle of the Nats' line-up by slugging a career-best 33 homers, coupled with 35 doubles and 100 RBI. He hit .271/.343/.510 in 154 games, won a Silver Slugger Award for the first time and finished 6th in the voting for the NL MVP. He hit a pair of homers against the St. Louis Cardinals in the NLDS, but both were solo shots and he managed only one other hit as the Nats bowed out in five games. A free agent after the season, he re-signed with the Nationals on January 8th for two years and $25 million. His signing created a glut of outfielders and first basemen on the team, with Morse and Werth fully healthy and joined by Rookie of the Year Bryce Harper, with Denard Span, acquired in a trade that off-season, seemingly assured of starting in centerfield. In 2013, he fell back to a .237 average in 152 games, with 19 doubles, 20 homers and 62 RBIs as the Nationals had a disappointing season. He bounced back in 2014, along with the whole team, coming in with a .259 average, 26 homers and 92 RBIs in 140 games. He once again struggled in the postseason, however, with only one hit in 18 at-bats as the Nationals were defeated by the San Francisco Giants in the NLDS. After the season, the Nationals bought out his option and he became a free agent, allowing him to sign a two-year deal for $25 million with the Chicago White Sox on November 21st.

His power fell off dramatically with the White Sox in 2015, as he connected for only 12 homers in 127 games, his lowest total in a full season. His batting average was only .207, with an OBP of .273, resulting in an OPS+ of only 78 and putting his future in doubt. He did get to pitch at the major league level for the first time that season, logging a perfect inning in a 13-6 beating at the hands of the New York Yankees on July 31st. He was mainly a DH that season, also making some starts at first base, as he and Jose Abreu alternated in the two positions; however, Abreu was a much more productive player. He was back with the White Sox in spring training in 2016, but on March 15th, he made an unexpected announcement that he was retiring from the game because of an undisclosed "personal issue". He was slated to make $13 million that season, but there were questions about how much playing time he was likely to see. It emerged quickly that the personal issue was related to his 14-year-old son Drake, who had taken the habit of spending just about every day in the clubhouses of the teams his dad played for; the White Sox, through team VP Kenny Williams, asked Adam to dial back his son's presence in order to limit distractions, something the veteran did not appreciate.

Following the 2013 season, LaRoche went on a United Services Organization holiday tour, visiting five military venues in four countries, talking with and entertaining troops deployed abroad at each stop. It was a continuation of a personal engagement in favor of veterans he had begun since moving to Washington, as he regularly visits wounded servicemen and women at Walter Reed Medical Center during the season. LaRoche was joined on the USO tour by two NFL players and two television personalities, all of whom had been active on behalf of veterans for some time.

He was one of a few big league players to hit at least 250 dingers and never make an All-Star team.