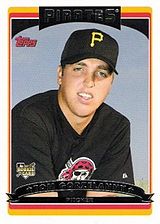 Tom Gorzelanny was drafted in the 38th round of the 2000 amateur draft by the Chicago White Sox but did not sign. After two years at the University of Kansas and a season at Triton Junior College, he was nabbed out of junior college by the Pittsburgh Pirates in the second round of the 2003 amateur draft. The 45th overall pick, he was signed by scout Mark Germann for $775,000. He had gone 7-2 with a 2.47 ERA and 91 strikeouts in 66 innings that season. Assigned to the Williamsport Crosscutters, he was a key figure on that club's dominance of the New York-Penn League en route to a title. He went 1-2 with a 1.78 ERA and was named the 10th-best prospect in the league as per Baseball America.

Gorzelanny was 7-2 with a 2.23 ERA for the 2004 Hickory Crawdads, striking out 106 batters in 93 innings and allowing just a .193 opposing average with 63 hits given up. Tom again was a key figure on a championship team and would have been second in the league in ERA but fell 19 innings short of qualifying as he got bumped up to the Lynchburg Hillcats, where his line read 3-5, 4.85 with 61 K in 55 2/3 innings. He was named the 13th-best prospect in the South Atlantic League and the 11th-best in the Carolina League.

In 2005, Gorzelanny spent the whole year with the Altoona Curve and had a 8-5, 3.26 campaign, striking out 124 in 129 2/3 innings as he fell under a strikeout per inning for the first time and he finished ninth in the Eastern League in ERA. He struggled in a late cup of coffee with Pittsburgh, allowing 8 runs in 6 innings. Tom began 2006 with the Indianapolis Indians and went 6-5, 2.35 with 67 hits in 99 2/3 innings and an International League-leading 94 strikeouts in his time there. Gorzelanny was selected to play for the US team in the 2006 Futures Game when Pittsburgh again came calling, switching Gorzelanny's AAA role with Oliver Perez's starting rotation slot. The move meant that Gorzelanny missed the Futures Game, his roster spot being taken by Indianapolis teammate Josh Sharpless. Gorzelanny was sidelined from mid-August until mid-September with elbow tendinitis. He was named Pittsburgh's minor league pitcher of the year and Baseball America rated him the #4 prospect in the IL. He had the best K/9 ratio among IL starters that year.

While Gorzelanny was considered by most a "lock" for the Pirates' staff in 2007, there was significant concern in spring training when his velocity was not up to past levels. Worse, he was rocked for four runs in his first inning in Grapefruit League play. He started 0-2 with a 9.45 ERA in the Grapefruit League and walked an uncharacteristic 14 in 20 innings yet still made the team over Shane Youman and Sean Burnett, who had pitched much better in camp. In his final spring training start, he did better and lowered his Grapefruit League ERA to 7.96. Gorzelanny's spring struggles did not carry over in the regular season as he started off 3-0 with a 2.05 ERA, picking up 3 of Pittsburgh's first 7 victories. On May 14th, he singled to left for his first MLB hit in his 37th career at-bat. It earned him a summer of free golf as he won a bet with Adam LaRoche. Had Gorzelanny not gotten a hit by the end of May, he would have had to buy LaRoche a new golf driver. LaRoche said it was a bet he wanted to lose. Gorzelanny finished 2007 with a 14-10 record and 3.88 ERA (112 ERA+). He led the Pirates staff in wins and was second to Ian Snell in ERA.

Gorzelanny battled control problems throughout the first half of 2008, walking 61 and striking out 53 in his first 87 2/3 IP while allowing 99 hits. He was 6-7 but with a 6.57 ERA and was leading the National League in walks. That led to a demotion to Indianapolis when Phil Dumatrait was ready to come off the disabled list. Midway through the 2009 season, Gorzelanny was traded to the Chicago Cubs along with John Grabow in exchange for Kevin Hart and Jose Ascanio.

Gorzelanny became a coach with the ACL Diamondbacks Red in 2022.