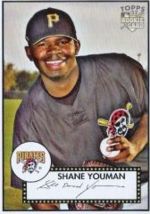 While there had not been an African native in Major League Baseball as the time of his debut, Shane Youman comes close as his father was from Nigeria. Youman was drafted out of high school by the Los Angeles Dodgers in the 45th round of the 1997 amateur draft but did not sign. Youman pitched for Louisiana State University in 1999 and had a 3.52 ERA in four appearances. As a sophomore, Shane was 3-0 with a 4.55 ERA and one save for the team, which went on to win the 2000 College World Series. In 2001, Youman completed his college career by going 3-2 with a 5.17 ERA and one save. During his time at school, he became only the second African-American pitcher in LSU team history.

Youman was drafted in the 43rd round of the 2001 amateur draft by the Pittsburgh Pirates and was their second-lowest pick to sign; also picked after the 30th round were future major-leaguers Rajai Davis and Chris Shelton, meaning that 3 of the 4 draftees picked after the 32nd round and signed went on to major league careers. The LSU alumnus did not appear for the Pirates that year.

Youman began his professional career with the 2002 Williamsport Crosscutters and had an impressive year, going 4-0 with five saves and a 1.45 ERA. Opponents hit .189 and he walked only 8 while fanning 48 in 37 1/3 IP. In 2003, the big left-hander moved up to the Hickory Crawdads and went 6-3 with 12 saves and a 4.65 ERA. He was 4-2 with two saves and a 3.16 ERA for the Lynchburg Hillcats, continuing to be relatively unimpressive in A ball. In 2005, Shane had a 8-6, 2 Sv, 3.92 year for the Altoona Curve. His control, opponent batting average and strikeout rate were nothing to write home about for a third consecutive season.

Youman visited his relatives in Nigeria in January of 2006 and credited the experience with helping him maintain his humility and realize the opportunities he had that others did not. He was converted to a starting pitching role that year and was a late-blooming player, going 7-2 with a 1.51 ERA for Altoona, walking only 20 in 95 1/3 innings with vastly improved control and only allowing a .201 average. Promoted to the Indianapolis Indians, Shane had a 4-0 record and 4.04 ERA. The 11-2 year in the minors led to his September call-up to Pittsburgh. Youman had a 0-2, 2.91 record for the 2006 Pirates.

Shane was considered a dark horse candidate to make the 2007 Pirates out of spring training. Pirates management appeared high on him, but with a week left in training camp, he was sent down. Youman went 4-6 with a 4.70 ERA for Indianapolis before being called up by Pittsburgh when Zach Duke went on the DL; the promotion was thanks to 3 good starts in his past four outings. Youman was 3-5 with a 5.97 ERA for the 2007 Pirates.

Youman was designated for assignment that winter and was claimed off waivers by the Philadelphia Phillies.

Despite his size, Youman is not known as an imposing, hard-throwing pitcher, but rather relies on finesse and location to achieve his goals.