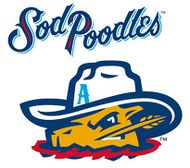 The Amarillo Sod Poodles, formerly of the Texas League and now in Double-A Central, took their nickname from pioneer slang for prairie dogs. They play their home games at Hodgetown.

Their 2019 debut revived an affiliated baseball history that spanned 43 seasons between 1922 and 1982 - successfully, as they won the TL title. They were the first affiliated team to play in Amarillo, TX, since the Amarillo Giants left town following the 1974 season; in the interim, a number of independent teams had played in the city.

The franchise left its brand in San Antone but brought along its San Diego Padres affiliation. That would last just one season; after the Coronavirus pandemic killed the 2020 campaign, MLB's 2021 Minor League Reorganization knocked the San Antonio Missions, representing the Alamo City, back to Double-A as the Padres maintained their affiliation. As a result, the Arizona Diamondbacks came rattling into Amarillo, taking over the Sod Poodles.