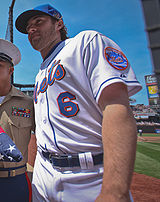 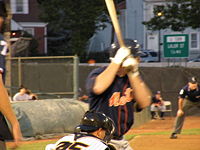 Nick Evans was drafted by the New York Mets in the 5th round of the 2004 amateur draft. He was signed by scout Dave Birecki and made his pro debut that summer.

Evans went 3 for 4 in his major league debut for the New York Mets on May 24, 2008, after his call-up from the AA Binghamton Mets. He then went hitless in his next 13 at bats. he played for the Mets every from 2008 to 2011, but never spent a full season in the majors. The most games he played in the major leagues was 59 in his fourth season, when he hit .256 with 10 doubles and 4 homers.

Nick became a free agent after the 2011 season and signed with the Pittsburgh Pirates for 2012, but injuries limited to 21 games, all in the minor leagues. After the season, he moved to the Los Angeles Dodgers organization but was released during spring training in 2013, He caught on with the Arizona Diamondbacks a couple of weeks later, but spent the entire season in the minor leagues: with the Mobile Bay Bears of the AA Southern League, he hit .267/.357/.449 in 133 games, splitting his time between first and third base with a handful of appearances in the outfield. He was promoted to the Reno Aces of the AAA Pacific Coast League at the start of 2014 and was scorching hot there, putting up a .335/.393/.641 batting line in 44 games as a utility player; he slugged 15 doubles and 11 homers during that span, accumulating 35 runs and 44 RBIs. The D-Backs had no choice but to bring him back to the big leagues and on May 28th, he made his first appearance in the Show in over two years. In his first start at first base on June 3rd, he and Chris Owings hit back-to-back homers off Jorge De La Rosa of the Colorado Rockies in the 4th inning to lead the team to a 4-2 win. However, his stay was short-lived, as he played only 18 games, hitting .273 and slugging .636, before being handed his release at the end of July.

Evans became a coach with the Visalia Rawhide in 2019 and Amarillo Sod Poodles in 2021.