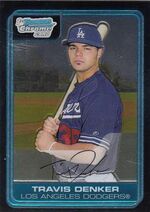 Travis Denker is a right-handed second baseman who made his debut with the San Francisco Giants on May 21, 2008.

Denker was drafted by the Los Angeles Dodgers in the 21st round of the 2003 amateur draft, lower than projected due to signability concerns. He was signed by scout Scott Groot for $100,000 and started his professional career that summer.

In 2007, he spent most of his season in the Dodgers organization, with the Inland Empire 66ers. He also spent a few games with the San Jose Giants of the Giants organization after he was traded to the San Francisco Giants for Mark Sweeney on August 25th, as the player to be named later in a deal that originally occurred on August 9th. Overall that year, Denker hit .300 with 11 home runs and 66 RBI in 118 games.

Denker started 2008 in AA, with the Connecticut Defenders, hitting only .184 in 25 games but still earning a promotion to the AAA Fresno Grizzlies where he hit .315 with 7 doubles in 17 games. He was called up to the Giants on May 21st, replacing Eugenio Velez as a back-up infielder. He made his debut that day, making an out in a pinch-hitting appearance.

Denker became a coach with the Visalia Rawhide in 2018-2019. After the 2019 season he coached the Salt River Rafters in the Arizona Fall League. Denker was scheduled to return to Visalia before the 2020 season was cancelled due to COVID-19. Denker was a hitting coach for the Amarillo Sod Poodles in 2021-2022.