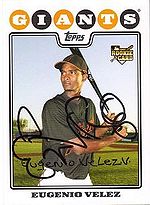 Eugenio Velez was signed by scout Tony Arias for the Toronto Blue Jays in 2001 and made his pro debut the next summer for the DSL Blue Jays. He came stateside in 2003 and played in the Blue Jays' chain through 2005. The San Francisco Giants then selected Velez in the AAA phase of the 2005 Rule V Draft.

Velez tripled to right at Petco Park for his first major league hit, playing for the Giants on September 14, 2007.

Velez set a couple of unenviable records playing for the Los Angeles Dodgers in 2011. First, he went 0 for 37 for the season, the most ever at-bats in a hitless season by a non-pitcher. The Pittsburgh Pirates' Hal Finney had previously held the record with an 0-for-35 season in 1936. When his last 9 hitless at-bats of 2010 were added to the total, Velez had an 0-for-46 streak, the longest ever for a position player, beating a record set earlier in the season by Craig Counsell of the Milwaukee Brewers who had gone 45 at-bats without a hit. His record was shattered by Chris Davis in 2019.