Note: This page links to 1990s and 2000s outfielder Mark Sweeney; for the minor league player of the same name, click here. 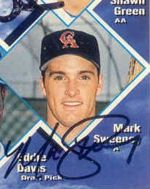 Mark Sweeney was a career pinch-hitting expert, having made the 25-man roster for 12 consecutive years, yet having never received more than 259 at bats in a season.

During spring training for the 2009 season Sweeney retired and took a role as an assistant coach with the Los Angeles Dodgers. In 2011, he was Special Assistant, Baseball Operations and Player Development for the Dodgers.

He was an almost exact contemporary of near-namesake Mike Sweeney: Mark was drafted in the 9th round in 1991, and Mike in the 10th round. Both played over 1000 major league games, Mark from 1995 to 2008 and Mike from 1995 to 2010, and both played more games at first base than any other position.