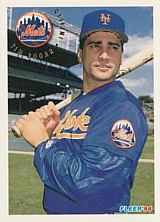 Tim Bogar played nine seasons in the major leagues, hitting only .228 but filling a role as a shortstop, third baseman and occasional second baseman and first baseman. Most of his at bats came with the New York Mets and Houston Astros, and he finished his career with the Los Angeles Dodgers in 2001. In 1995 with the Mets, he hit .290 in 145 at-bats. He had six years in the minors before coming up with the Mets in 1993. His highest batting average and slugging percentage in the minors were .282 and .401 at Columbia in the South Atlantic League in 1988, albeit in just 45 games.

Bogar managed the Akron Aeros in the Cleveland Indians organization at one point, leading them to the Eastern League Southern Division regular season crown. In December 2007, he declined an offer to return as the Akron skipper the following season. He instead was named to the Tampa Bay Rays coaching staff as the Quality Assurance Coach in 2008. From 2009 to 2011, he was first base coach of the Boston Red Sox, then in 2012 was promoted to bench coach under new manager Bobby Valentine. His tenure did not outlast that of Valentine, as he was let go following the season, with new manager John Farrell choosing Torey Lovullo to be his right-hand man. In 2014, he was the bench coach of the Texas Rangers when manager Ron Washington stepped down on September 5th to attend to a personal matter. He took over the team's managerial reins for the remainder of the season and guided the Rangers to a strong finish of 14-8 over the last three weeks. He was one of three finalists to get the permanent job after the season, but lost to Pittsbugh Pirates bench coach Jeff Banister. He moved to the Los Angeles Angels as special assistant to the GM in 2015. In 2016, he was appointed bench coach of the Seattle Mariners. In 2018, he moved to the Washington Nationals as first base coach and was with the team when they won the 2019 World Series. At that time, he was under serious consideration for the job of manager of the New York Mets, but dropped out of consideration immediately after the World Series. He was then appointed the Nationals' bench coach for 2020.