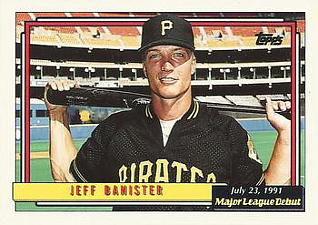 Banister had bone cancer in his ankle when he was in high school and almost had his leg amputated. He had osteomyelitis as well, a crippling affliction that once struck a young Mickey Mantle, and needed seven operations on his left leg and ankle as a teenager. Jeff played for Baytown Junior College, where he had his vertebrae crushed in a home-plate collision that left him temporarily paralyzed from the neck down.

By 1991, Banister said "It's become an obsession for me to make [the majors], but I know to just take each day as it comes. You can't put a time table on your dreams. I know one day I'll play in the majors, even if it's only for one day." Bisons manager Terry Collins said "Determination-wise, he is one of the best individuals you will meet." Jeff hit .244/~.324/.308 in 79 games for Buffalo, splitting catching duties with Tom Prince. That summer, he got his one day to play in the majors. On July 23, he made a lone pinch hitting appearance for Doug Drabek resulting in a 7th inning single off Dan Petry of the Atlanta Braves. Jeff spent five days on the big league roster altogether.

Jeff was a player-coach for the 1993 Carolina Mudcats, going 5 for 15 with a double and a walk in 8 games to conclude his playing career. Banister got his managerial start in 1994 with the Welland Pirates, as they went 30-44 and finished 12th in the 14-team New York-Penn League. Jeff then guided the 1995 Augusta GreenJackets to a South Atlantic League pennant despite having no player hit more than six home runs. Augusta went 43-25 in the first half, 33-37 in the second half and 5-0 in the postseason. In the 1995-1996 Hawaii Winter League, Banister managed the Honolulu Sharks to the best record (29-23), though they fell in the finals. In 1996, Jeff guided the Lynchburg Hillcats to a 65-74 record. The next season, he started out with Lynchburg, then was promoted to the Double A Carolina Mudcats partway through the season. He spent all of 1998 with Carolina and they finished 59-80. In 2004, Banister was interim manager of Lynchburg for two weeks.

From 1999-2002, Banister worked as Pittsburgh's Major League Field Coordinator. He assumed the job of Minor League Field Coordinator in 2003. In 2008, Banister became interim pitching coach of Lynchburg when Bob Milacki stepped down; Mike Steele took the full-time job. Midway through the 2010 season, he replaced Gary Varsho as the Pirates' bench coach. When the Pirates finally broke their historic 20-year streak of losing seasons in 2013, he was one of those most deeply affected, as he had been a member of the organization for all 20 of those painful seasons, making the team's turnaround all that much sweeter for him.

After the 2014 season, Banister won the competition to become the new manager of the Texas Rangers starting in 2015. The other two finalists were Tim Bogar, who had done an excellent job after taking over on an interim basis for Ron Washington in September, and Kevin Cash, who was named manager of the Tampa Bay Rays a few weeks later. In Jeff's first season at the helm, he orchestrated a remarkable turnaround by the Rangers, taking them from a last-place finish the year before to a division title. The team then took a two games to none lead winning twice on the road in its ALDS against the Toronto Blue Jays, but the Rangers lost the final three games to bow out of the postseason. He was named the American League Manager of the Year in recognition of his outstanding work. The Rangers won another division title in 2016 but once again ran into the Blue Jays at the Division Series stage, and this time were swept in three games. The next two seasons were highly disappointing, as Texas was never in the race either year, and on September 21, 2018, Banister was fired with the team in last place. Bench coach Don Wakamatsu took over for the balance of the season. Jeff became a special assistant in baseball operations for the Pirates in 2019 but was laid off in mid-June 2020 as part of team restructuring.