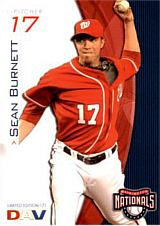 "Honestly, it might have been more nerve-racking than my debut because my debut came so easy. It was such an easy road coming up through the Minor Leagues. This one was so much more hard work, and harder to get here, and a lot more time." - Sean Burnett, to MLB.com, after returning to the bigs in May 2008 for the first time since 2004

Pitcher Sean Burnett attended Wellington High School and went 10-1 with a 1.04 ERA as a senior, earning AAU Player of the Year honors. He had been the worst hurler on the US team that won Gold at the 1998 World Youth Championship (1-0, 7.71). Following graduation, he was selected by the Pittsburgh Pirates in the first round of the 2000 amateur draft. He reached the majors with 13 starts (5-5, 5.02 ERA) in 2004, undergoing Tommy John surgery on September 22. He missed the entire 2005 campaign and spent the entirety of 2006 and 2007 with the AAA Indianapolis Indians. Burnett was taken off Pittsburgh's 40-man roster on February 1, 2008, to make room for journeyman utility infielder Ray Olmedo, who was waived shortly thereafter. Burnett cleared waivers and was invited back to Bucs camp as a non-roster invitee. Burnett said "I was upset and really embarrassed at myself. I'm a former first-rounder. I don't think I've lived up to any expectations I had for myself."

In May, Sean got a new lease on life with the DFA'ing of Evan Meek, becoming a valuable lefty option out of the Pittsburgh bullpen in 96 appearances over the next season plus as a LOOGY. He really took off with a deal to the Washington Nationals at the 2009 trading deadline. Over the next three seasons, he made 212 appearances with D.C., racking up 9 saves. In 2010, despite a 1-7 record, his ERA was a sterling 2.14 in 73 appearances, striking out 62 hitters in 63 innings. Looking to get PAID, Sean turned down his half of a mutual 2013 option with the Nats in favor of a two year, $9.5 million deal with the Los Angeles Angels. Unfortunately, the bottom fell out. He battled with a 0.93 ERA in 13 appearances in year one of the deal, only to undergo elbow surgery. He made 3 disastrous appearances in 2014 and blew out his UCL, missing all of the next two years following another TJ operation. He made 10 final appearances back with the Nats in 2016, retiring early in 2019 while pitching in the New York Mets system.