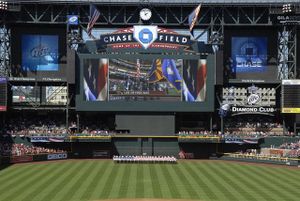 On July 1, the 2010 Arizona Diamondbacks cleaned house, firing general manager Josh Byrnes and manager A.J. Hinch simultaneously. Bench coach Kirk Gibson took over as interim manager, while team Vice-President Jerry Dipoto became the interim GM. Both Byrnes and Hinch had long-term contracts, and when Hinch had been named manager a year earlier, in spite of having no managing or coaching experience at any level, it was explained that the team was in a rebuilding mode and that there was little pressure to win immediately. However, the team's 31-48 record at the time of the firings - worst in the NL West and third-worst in the major leagues - with no signs of improvement on the horizon, apparently changed upper management's minds.

In a four-day span ending June 27, Arizona starters set a major league record by allowing five hits over four days, including a no-hitter by Edwin Jackson. On August 11, they hit four consecutive home runs in an inning off David Bush of the Milwaukee Brewers, tying a major league mark. They became the first team to have their batters reach 1,400 strikeouts, doing so in mid-September, and finished the season with a record 1529 strikeouts, shattering the all-time major league record. 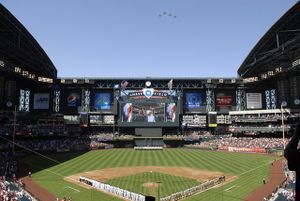 Another view of the season opener.