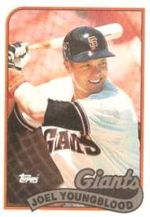 He went to Austin High School in Houston. In the January 1970 amateur draft, he was picked by the Cincinnati Reds in the second round as a catcher. At the time, there was not much room for a catcher with the Reds with Johnny Bench solidly entrenched for years to come. Youngblood was thus used in the infield in his first pro season.

He spent most of the 1970 season with the Sioux Falls Packers in the Northern League. He was mostly a second baseman with some time at third base as well. In 65 games, his line was .225/.292/.280. He also played 17 games with the Tampa Tarpons in the Florida State League. It was during his time with Tampa that he got four front teeth knocked out from a grounder, which made him a little shaky that year.

In 1971, he was Tampa's main third baseman with some time at shortstop and in the outfield as well, setting the road to a career in which he would be known for his versatility. He led the team in runs (75). In 136 games, his line was .255/.362/.363. His climb within the Reds chain continued in 1972 and his numbers kept improving as well. With the Trois-Rivières Aigles in the Eastern League, his line was .290/.369/.456 in 104 games, playing third and the outfield. During the season, he suffered a fractured jaw when struck by a ground ball.

The Reds were loaded in the mid-1970s and opportunities were few and far between for young players. Youngblood was stuck in AAA for the next three seasons, with the Indianapolis Indians, in the American Association. In 1973, he was used at third, short and in the outfield but he was almost exclusively an outfielder the next two seasons. His first two years with Indianapolis were very productive ones, with an OPS over .860 before dropping a bit in 1975. It was his last in the minors.

Youngblood made the big league team in 1976 as a reserve, playing six different positions, including one game behind the plate, the only one of his career as a catcher. He made only 5 starts during the season. In 55 games, his line was .193/.233/.246. He didn't play in the post-season but got a ring anyway as the Reds won the World Series, sweeping the New York Yankees while he watched from the bench.

He reported to spring training in 1977 with not much hope of playing more, but at the end of March, he was traded to the St. Louis Cardinals for minor league pitcher Bill Caudill. But things were not much better in St. Louis. He made only 5 starts in the first two months and a half of the year. In mid-June, he was sent to the New York Mets for infielder Mike Phillips. At first, he was used as a super sub by the Mets, filling in left and right field, and at third and second base. Youngblood got the regular assignment at second base in September. In 97 games, his line was .244/.296/.316.

It was pretty much the same in 1978 as he started only 24 games in the first four months. From then on, he received his first extensive playing time with 37 starts in August and September. In 113 games, his numbers improved at .252/.294/.436. Youngblood was touted to be the team's third baseman in 1979, but when the Mets acquired Richie Hebner at the end of spring training, he was without a position again and thus was not on the opening day lineup. It didn’t take long before things changed though. He got his first starts in both ends of a doubleheader in the second week of the season after an injury to Elliott Maddox. He was hitting well and manager Joe Torre kept playing him. After two months, his line was .305/.379/.553 and he remained in the daily lineup most of the season in left and right field. Playing a career-high 158 games, his final line was .275/.346/.436, hitting 16 home runs and adding 18 stolen bases. After the season, he was selected to take part in a tour of Japan, representing the National League.

Just before the 1980 season, Youngblood signed a three-year contract with the Mets after losing in arbitration the year before. His numbers were pretty much the same in 1980, except in the power department as his home run total fell from 16 to 8 due in part to a sore wrist. Otherwise, his line of .276/.340/.381 in 146 games looked like the year before.

In 1981, he was asked to train at third base when he showed up at training camp. After a first month when he struggled, he was back playing right field. Youngblood then went on the best offensive outburst of his career. In May and June, he hit .392 with a 1.047 slugging percentage in 28 games, driving in 20 runs. But the players strike in June put a premature end to what was by far the best season of his career. At that point, his line was .359/.406/.555, leading the league in batting average although he was on the disabled list. When play resumed, MLB first presented its annual All-Star Game. Youngblood was picked in the NL squad but he didn't have the opportunity to keep his production going in the second half because his season ended on August 14th due to a knee injury.

In 1982, Youngblood was entering his last year before free agency. The Mets were going through big changes with a new management. Youngblood was the opening day right fielder but early on, it was obvious he wouldn't be penciled in the starting line-up day in and day out, especially with Ellis Valentine waiting for a chance to play as well. He was traded to the Montreal Expos on August 4th in return for pitcher Tom Gorman. He was the third player to play for two teams in one day, but the first to get hits for two different teams in one day, and to play in two different cities on the same day. He went 1 for 2 in the Mets' game at Wrigley Field in an afternoon game. He then flew to Philadelphia, PA where his new team, the Montreal Expos, were playing a night game against the Phillies. Inserted as a pinch-hitter, he got a single. Both hits came against Hall of Fame pitchers, Fergie Jenkins of the Chicago Cubs and Steve Carlton of the Phillies. He made a quick impression with the Expos, with four multi-hit games in his first 12 games in the outfield. But his production nosedived after that and he made only 3 starts in September. He had no intention to re-sign with the Expos after the season. The San Francisco Giants signed him to a multi-year contract instead.

In 1990, Youngblood played for the Sun City Rays of the Senior Professional Baseball Association. He played in 22 games and had batted .326 with 4 home runs and 16 RBI when the league folded.