The 2010 Toronto Blue Jays played their home games on new turf at the Rogers Centre, having replaced the older artificial turf with a newer, more natural-feeling version. The new artificial turf was tried out at the spring training complex in Florida where it was well received by the players and staff. There were fewer seams where the various pieces met, and it was hoped this would improve the players' on-field experience. 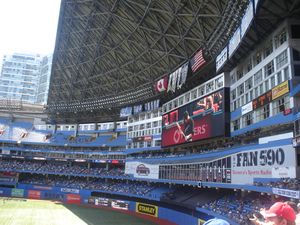 Scoreboard at Rogers Centre in 2010.

Perhaps the most noticeable change for the club in 2010 was the absence of long-time team member Roy Halladay, who was traded to Philadelphia in the off-season. Halladay was also the team's Opening Day pitcher for many years, but in his absence, the honor went to Shaun Marcum to start off the season. The honor was surprising, given Marcum had missed all of 2009 recovering from Tommy John surgery. Marcum had a great start, taking a no-hitter into the 7th inning. Unfortunately, the Jays would lose the April 5th game against the Texas Rangers by a score of 5-4 as new closer Jason Frasor blew a 4-3 lead in the 9th inning. Marcum's good performance was a harbinger of things to come. Although still reeling from injuries to Jesse Litsch, Dustin McGowan, Mark Rzepczynski and Scott Richmond, the Jays' patched-up rotation more than held its own in the early going, with Ricky Romero and Brandon Morrow both taking no-hitters into the sixth inning in April starts, and Dana Eveland and Brett Cecil also turning out some good outings. This kept the bullpen fresh, and new closer Kevin Gregg thrived, leading the circuit in saves in the early going. The Jays went 12-12 in April, and led the American League in HR's with 35.

On the hitting side, the Blue Jays came out like gangbusters, even though the previous season's best two hitters, 2B Aaron Hill and DH Adam Lind both came out of the chute slowly, Hill even making an early stay on the disabled list. In spite of that, the Blue Jays were leading the American League in home runs in late May with some unlikely heroes: CF Vernon Wells was a rejuvenated man in April, free from the wrist injury that had sapped his power in 2009; Jose Bautista alternated between RF and 3B and hit at both positions, tying Paul Konerko of the White Sox for the major league homer lead in May; C John Buck, picked up form Kansas City in the off-season had a three-homer game, as did 3B Edwin Encarnacion. New SS Alex Gonzalez also showed an unexpected power stroke. The combination of power and good starting pitching paid early dividends: on May 25, the Jays were 27-20, and keeping up with the New York Yankees and Boston Red Sox in the AL East, although already 6 games back of the torrid Tampa Bay Rays, who had the best record in all of baseball at that point. They did set a team record for home runs in a month in May, clubbing 54 long balls, including 12 by Bautista. They finished the month only 3½ games back of Tampa Bay after beating them 3-2 on May 31 thanks to another low-hit start by Morrow; even more impressive, they were only one game back of the Yankees in the wild card race at that point. They would end the month of May 19-10, and again led the AL in HR's with 54. 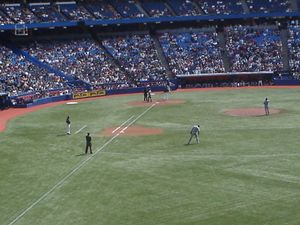 The Jays head honcho Alex Anthopoulos started building a team that hoped to contend in future years by working from the ground up, notably signing several Latino players, including Adeiny Hechevarria from Cuba. Understanding that the Jays could not outspend the Yankees or Red Sox in acquiring the best free agents, Anthoupoulos hoped to pluck the brighest future stars from Latin America and "beef them up" through the Jays minor league system, seeking out new avenues seemingly ignored by the other clubs. The hope was that in a few years, these bright young stars would be able to compete with the best in the AL East. Another similar future-oriented move was swapping hot-hitting SS Gonzalez with the Atlanta Braves for Yunel Escobar immediately after the All-Star Game: while Escobar was having a poor year with the bat, he was 5 years younger than Gonzalez and hat hit well in the past, and indeed found his hitting stroke again after changing teams.

The wheels fell of in June; the club would only go 9-17 (with an equally dismal 6-8 at home). Dropping the proverbial long ball, they would only score 26 homers in June, 7th best in the AL.

Improving in July, the Jays went 14-11 and again led the AL with 43 homers. The Jays thus continued to play surprisingly well, even if the great seasons by the Yankees and Rays meant they were essentially out of the playoff picture by August. They would then put up a decent .500 winning percentage in August (going 15-15 overall and 8-6 on the road.) Their 43 homers would only get them second in the AL that month. On August 2, they tied an American League record by hitting 6 doubles in the 5th inning of an 8-6 win over the Yankees.

Lost in the barrage of doubles and home runs, and Bautista's continued dominance of the AL home run race, were some great pitching performances: Romero pitched a complete game 2-hitter at New Yankee Stadium on August 3, then Morrow no-hit the Rays until two outs in the 9th inning on August 8, before settling on a complete game one-hit shutout. On August 16, it was Marcum's turn to pitch a one-hitter, beating the Oakland A's, 3-1. Cecil and a newly-healthy Rzepczynski were also pitching well at that point, giving the Jays a tremendous starting rotation that made fans (almost) forget about Halladay's departure.

In a move that caused consternation among some fans, Blue Jays owner Rogers placed 25 games on their newly-launched channel Sportsnet One starting in August. The problem was that the new channel was not available to many customers not served by the Rogers Cable company. Fans loudly complained on the message boards and on the various social media outlets about missing out on these games. They were however still available on the radio or on MLB's internet subscription package so fans didn't entirely get to miss them. The new television channel was not widely available across Canada, and many fans were upset over Rogers' decision, especially at a time when fan interest in the team was building after many years in the doldrums.

Toronto signed a player development contract with the Vancouver Canadians on September 17, 2010 that made the Canadians a short-season affiliate of the Jays. The Jays brought almost every key member of the front office to the press conference to announce the deal, including Rogers Communications vice-chair Phil Lind, president and CEO Paul Beeston, GM Alex Anthopoulos, assistant GM Tony LaCava and director of minor league operations Charlie Wilson. The Jays hope to see more players from the West Coast come to the club.

Bautista wound up breaking George Bell's club record of 47 home runs, surpassing that number in mid-September. Bautista would go on to hit his 50th HR on September 23 playing while playing Seattle at home. That would prove to be a big game for both clubs as Ichiro Suzuki would have his 200th hit of the season later in the game. The team ended up with 7 players hitting 20 or more home runs (Bautista 54, Wells 31, Hill 26, Lind 23, Encarnacion 21, and Overbay and Buck with 20), which tied a major league record.

The club played their final homestand on September 27-29 against the Yankees. The September 29th game was proclaimed "Thank You Cito Night", with fans receiving a commemorative ticket stub to honour Cito Gaston's many years with the club.